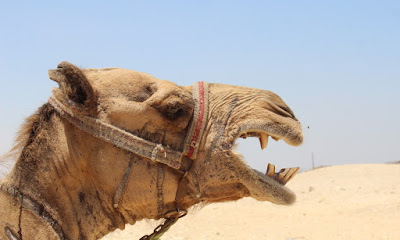 The coronavirus has forced many of us to stay home more than we are used to, and that can lead to wonderful or not-so-terrific outcomes. People can tend to get a little touchy, slightly more irritable than normal. Reminds me of a peculiar habit camels seem to have. Read on…

William Barclay said, “There may be greater sins than touchiness, but there is none that does greater damage to the Christian church.” I found that quote as I was reading what Paul wrote 2 Timothy, instructing the young pastor that leadership requires thick skin, someone who is not easily offended. In fact, a leader is one who “patiently endures evil.” It could also be translated, “Bearing evil from others without resentment.” This is a rare quality, isn’t it? Let’s face it. There are lots of people who cannot bear anything without resentment, much less evil. They get resentful at the stoplight for staying red longer than they think is just. Look at them the wrong way and you are off their party-invitation list forever. Others will allow you a wrong look or a cross word or two, but they are adding your missteps to an invisible scale that they keep in their memory. Whoa to you when you finally tip the scale in the wrong direction. This is illustrated in nature, I discovered, with camels. Who knew? In his book, Zoo Vet, David Taylor writes, “Camels may build up a pressure cooker of resentment toward human beings until the lid suddenly blows off and they go berserk. In Asia, when a camel driver senses trouble, he gives his coat to the animal. Rather like Japanese workers who are reported to work off frustrations by beating up models of their executives, the camel gives the garment (a fit)—jumping on it, biting it, tearing it to pieces. When the camel feels it has blown its top enough, man and animal can live together in harmony again.”

Talk about getting your hump in a wad. And, just wondering, how many coats does a camel driver have to keep on hand? The problem with that whole scenario is obvious. If Carlos the camel owner is off his game by just a little, and doesn’t correctly read the signs that Carl the Camel is subtly sending him, it may be that Carlos, not his coat, is torn to pieces. Same way with you, as you face the wrath of Ken or Kara the church members. You may never know when you say the very thing that sends them into orbit. Or out the door. They won’t even give you a chance to offer them your coat or your hat to jump up and down and spit on. They just bolt. You may hear some reasons why they exploded later, as a friend of a friend of theirs tells you what they said about you on Facebook. Or, you may never know.

Paul’s instruction to young Timothy is clear: don’t be a pressure cooker of resentment yourself. When the camels are spitting and stomping all around, you are to remain calm. You are to be quick to forgive and slow to take offense, not the other way around. That doesn’t mean a leader is as silent as a post. No, he is to be skilled in “correcting his opponents with gentleness.” This is part of the problem: leaders who are unable or unwilling to gently correct evil behavior.

There is power in the life that refuses to drink in bitterness when others attack. It is the power that Christ Himself displayed as He was mocked and beaten and spat upon and finally crucified. There is no more beautiful picture of Christ than that of suffering servant. “Like a sheep he was led to the slaughter and like a lamb before its shearers is silent, so he opens not his mouth.”

Two things, then. When pressure at home builds up, go outside. Exercise! And, be very careful around your camel.
By Mark Fox