We Are Not Called to the Bench 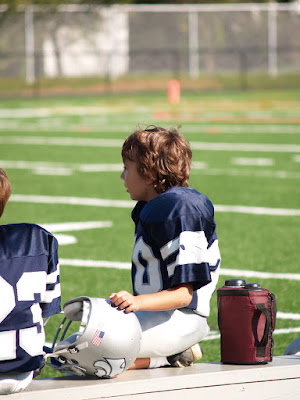 When I was 13 years old, and weighed about 95 pounds, I joined my junior high school football team. At one of the first practices where contact was involved, we got introduced to what the coach called “the meat grinder.”
The name fit. Two boys lined up facing each other, 10 yards apart. On either side were tackling dummies, laid end to end, to create a narrow channel within which the “meat” could be ground. One boy was designated the runner, and handed a football, the other designated the tackler, and was given jeers and whistles and other forms of encouragement by the rest of the team.

If this were a Disney movie, I would have bowled C.D. over, knocking him senseless, and the other boys would have carried me on their shoulders to the locker room, the coach running to catch us, anxious to talk to me about being their star running back that year. This was not a Disney movie.

C.D. hit me like a freight train, driving me back past the point where I had started running, and finished the job by landing with his full weight on my skinny frame. I lay there for a few minutes as the team snickered into their hands, and then I slowly raised my body from the dust, mentally checking to see if I still had all of my body parts. The only thing I can figure is, the coach was trying to get me to quit, but I was too stupid or too proud or both. I stayed on the team ... but not really.

You see, though our team went undefeated that year, I never saw one minute of playing time. It wasn’t because the coach didn’t try to get me in the game. We would be up by 45 points at halftime, usually, and in the second half the coach would start putting in the scrubs. Eventually he made his way to me.

“Fox, have you been in the game yet?” he would always ask.

“Yes sir!” I would always squeak, mortified that he would call my bluff and make me play. But the coach knew what was going on, and he didn’t push it.

I was a part of a championship team, but I never got in the game. I was on the sidelines the whole year, cheering on my teammates, thankful to be there, but praying I would not have to actually go on the field and face my opponents.

I am still part of a championship team, the undefeatable church of Jesus Christ. The Apostle Paul said, “We are afflicted in every way, but not crushed; perplexed, but not driven to despair.” I think he knew something about being in the meat grinder. His response was never to retreat to the bench and the protection of the sideline. Paul, like his Savior, endured the trials, knowing that victory would come to those who put their trust in God.

I have been through a few “meat grinders” since that year in junior high. Not on the football field but in ministry, in marriage, and in the day to day challenges that can leave us all bruised and bewildered. But by God’s grace, I will never retreat to the bench again.
By Mark Fox