You Really Do Need the Light 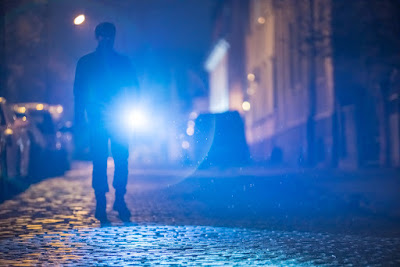 It was dark outside, but I scoffed at the thought in my mind that said, “You should take a flashlight so you can see what you are doing.” That was the logical side of my brain talking. My testosterone spoke up and said, “You don’t need no stinking light! You know where the cinderblocks are in the back yard, and this will take exactly thirty seconds to do.” I was putting up our Christmas tree and needed a cinderblock to help it stand up. Cheap tree stand, don’t ask. Anyway, my glands won the argument with my brain, and that is never a good thing, so I walked out and picked up the cinderblock. I didn’t bother to wear work gloves, either, for the same reason: “I don’t need no stinkin’...”

I set the block down on the back stoop and was reaching for the doorknob when I saw it. Just inches from my hand was the biggest, healthiest black widow I had ever seen. I screamed and dropped the cinderblock. As far as I know, the spider didn’t make a sound. She didn’t look nearly as surprised as I was, either, but maybe that’s because the black widow thrives in darkness, but you and I were made for the light. My problem that night wasn’t that I had no light, but that I was too proud to use it. I trusted myself, and my abilities. I did not want any help, which describes the most common disease known to man. In fact, the entire human race is dying from it.

It is still dark outside, and there is danger to our souls that makes the black widow look like a cuddly toy. How can we find our way? The psalmist puts it like this: “The entrance of Your words gives light; it gives understanding to the simple.”

Michael Billester visited a small hamlet in Poland before World War II. He gave a Bible to a peasant, who was converted by reading it. The new believer then passed the Bible on to others. The cycle of conversions and sharing continued until 200 people had become believers through that one Bible. When Billester returned a few years later, this group of Christians met together for a worship service in which he was to preach the Word. He normally asked for testimonies, but this time he suggested that several in the audience recite verses of Scripture. One man stood and said, “Perhaps we have misunderstood. Did you mean verses or chapters?” These villagers had not memorized a few select verses of the Bible but whole chapters and books. Thirteen people knew Matthew, Luke, and half of Genesis. Another person had committed to memory the Psalms. Combined, these 200 people knew virtually the entire Bible by memory. That single copy of the Bible given by Billester had done its work. The entrance of the words of God had brought light and transformed lives.

There are some who hear that story and say, “Oh, that is wonderful. The Bible is an amazing book.” But the evidence that they don’t really believe what they say is that their Bible is collecting dust. They couldn’t begin to tell you the last time they read it or the last time something in it changed their lives. They couldn’t tell you the last time they went to a Bible Study where real study took place. They have a Bible, but they are no different from those who do not have one.

They keep it in their drawer, right next to the flashlight and the work gloves.
By Mark Fox