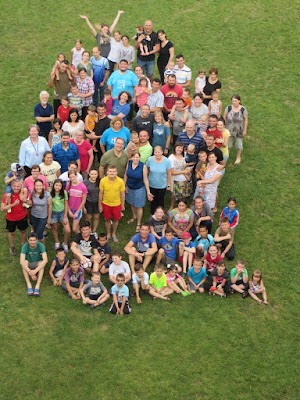 Two weeks ago, Cindy and I were finishing up a week of camp with about 20 Moldovan families. 100 people gathered for a week in the city of Calarasi to study together, worship together, eat together, and get to know the Lord and each other better. The experience reminded me a lot of the times when, as a teen, I would go to summer camp with my youth group. This place in Moldova had everything a child or teenager could hope for: volleyball, ping pong, tetherball, corn hole, a zip line, and a pool. And everything an adult could hope for: no video games or TVs!

The food was excellent, and included some traditional Moldovan food, like “mamaliga,” which is Romanian cornmeal porridge. But we weren’t there for the food or volleyball. Cindy and I were invited to speak to and spend time with these couples who came from a number of different churches and different towns in Moldova. I got to speak 5 times to the whole group, and 4 times to just the men. Cindy spoke twice with the women and shared at other times in their breakout sessions. We also did two ‘elective’ classes together, where we mainly answered questions about marriage and parenting. Lots and lots of questions. We finally had to stop the session on parenting after 90 minutes, so we could all go eat supper.

Some of our favorite times were meals, where we tried to sit with different Moldovan families and have conversation. Since our command of the Romanian language is basically limited to “good morning,” which people get tired of hearing after a while, we depended heavily on their knowledge of English. In most cases, either the husband or the wife (or the children!) could translate for us. We got to know Pavel and Lydia and heard her amazing testimony of how God saved her parents when they were part of the Orthodox church. They left to join an evangelical Christian church and were persecuted for it. Lydia told us that when her mother became a Christian, she started going to the church every morning at 5 a.m. to pray for her children, for their salvation. She also prayed that God would put them in the ministry. All eleven children came to know Jesus, and all of them are either in vocational ministry as pastors or helping with ministry in their churches. Dear reader, if you are not a believer, but your mother or your grandmother is praying for your salvation, you should just give up now and surrender your life to Jesus.

We also got to know Dan and Emily. They left the U.S. more than 18 years ago to go to Moldova and serve the Lord. They planted a church in the city of Hincesti, and God has slowly given them favor with the people. For most of those 18 years, they were treated as outsiders, and the people in the city expected they would not last. Instead, they persisted in loving the people, serving them, and showing hospitality. In the last few years, the people of the city have opened their hearts and allowed Dan and Emily in. But it took nearly 18 years for that to happen! The average stay for a pastor in America is 6 years. That is a good improvement over 20 years ago, when it was 3.6 years. But it is a long way from making an 18-year commitment just to lay a good foundation.

As with my previous 5 trips to this country in eastern Europe, I was thankful again for the team of missionaries God is using there to encourage Moldovan pastors and help build Moldovan churches. World Team Moldova consists of 5 married couples and 2 singles, and they are an amazing group of different talents and spiritual gifts whom God has brought together with one vision. They do what they do so well, and it is a privilege to go and help them do it, for God’s glory.

This was a summer camp experience to remember.
By Mark Fox