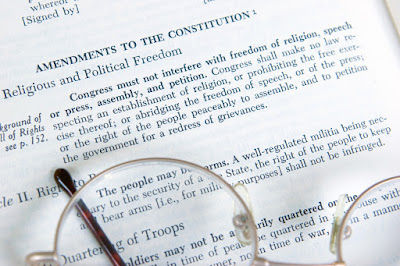 Every now and then someone will write a letter to the Times-News complaining that guest columns or the Open Forum are being used as platforms to discuss religious beliefs. It happened again this week as a reader took issue with a column about the President, and asked, “What happened to the concept of separation of church and state?”

First of all, the newspaper is not the state. And a page in a local newspaper dedicated to opinion columns and letters to the editor is intended for the purpose of open debate on important issues. Second, the concept of “separation of church and state” cannot be found in our Constitution. Indeed, the First Amendment protects the church from the state, not the other way around. A few years ago, a reader suggested that the editor “set some limits for this section to local matters that concern all.” I was frankly amazed at the brazen request, on several levels. First, that the “Open” Forum be restricted at all. It reminded me of our sixth president, John Quincy Adams, and his tireless fight to abolish slavery when he served in Congress after leaving the White House. Certain members of the Congress, weary of hearing Adams’ petitions each week on slavery, finally got the votes necessary to pass a “gag rule,” which automatically tabled petitions against slavery. John Quincy Adams tried various ways to bypass the order, but it was eight years before Congress came to its senses and reopened the forum.

Second, I am surprised that someone would petition the editor to limit the Open Forum to matters that “concern all.” Who would decide which issues concern all and which concern only some? Do letters about the local school board concern all? No, not the 2,500 students and their families who are enrolled in private or home schools. I read those letters with interest, however, because the education of children in this county affects all of us. Do letters about the Burlington police and their services concern all? No, not those who live outside the city limits, as I do. I read those letters with interest, however, because the safety of our city dwellers affects us all. Do letters about faith and religion concern all? Some would say no. The truth is, however, there are no more important matters that affect the well-being of every citizen of Alamance County than those of faith and religion. Francis Schaeffer said that Christianity is not merely religious truth, it is total truth — truth about the whole of reality. Kent Hughes said the most important thing about a person is what he or she believes about God. Jesus said, “Seek first the kingdom of God and his righteousness.”

In her book, “Total Truth,” Nancy Pearcey writes, “Most secularists are too politically savvy to attack religion directly or to debunk it as false. So what do they do? They consign religion to the value sphere — which takes it out of the realm of true and false altogether. Secularists can then assure us that of course they ‘respect’ religion, while at the same time denying that it has any relevance to the public realm.”

The letter to the editor a few years ago stated, “I understand the issue of freedom of speech but, as a reader, I am weary of reading what other people believe, and frankly, could care less. Your religion should be a private matter between you and your God.” May I state her opinion in another way? She might as well have said, “It is my opinion that matters of belief not be printed in the public forum... except, of course, this matter of belief that I wrote and I hope is printed.” I am thankful that the Times-News printed her letter. Her opinion is valuable and should have its place in the forum. So should yours.

The Open Forum in any newspaper is always one of the most-read sections. I always read the letters to the editor, and most of the columns. I especially appreciate the ones that are carefully crafted, well-reasoned and respectful. I am thankful for those who are willing to enter the public forum boldly!
By Mark Fox