Today I Have Married My Best Friend 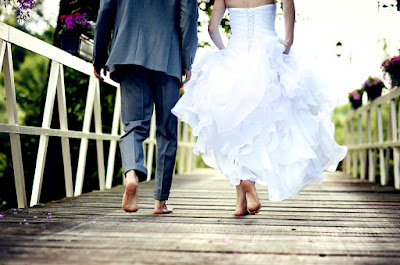 They say that marriage as an institution is in trouble. Every time I hear something like that, I have to laugh. That’s like saying, “Gravity is in trouble.” Any day now the reason you won’t be able to find your car keys is not going to be because you don’t remember where you dropped them. It will be because they didn’t stay there. They floated off. Last time I checked, gravity was working just fine with no end in sight to its consistent power to keep our feet firmly planted on the earth.

Marriage is in trouble? That’s like saying that the ocean, as we know it, is in trouble and will disappear any day now. There goes that beach trip you had planned. Hey, look on the bright side. You will never again hear the soundtrack to “Jaws” start playing in your head as you stick your big toe in the water because, uh, the water won’t be there. No more fear of undertow. No more ocean? Hey, that’s like losing your hair: less hair to comb but more face to wash. Less water to swim in (none, actually) but miles and miles and miles of shells to explore.

Some of the same people who gleefully report that marriage as we know it is coming to a grinding halt also claim the church as an institution is dying. Yep, they gloat, fewer and fewer find a need for church in their lives. It will soon disappear with a whimper and we can be done with it. People can feel good about believing in themselves without the confusion about whether there is anything “out there.”

It is precisely because there IS Someone out there that I do not fear either the end of marriage, or the law of gravity, the church, the sun, moon or the stars. He is God. The same one who created the heavens and the earth ordained that a man would leave his father and his mother and be united with his wife and the two would become one flesh. Marriage was God’s idea and he hasn’t changed his mind about it. In this life there will always be marriage that follows God’s design: one man and one woman, for life.

Jesus said, “Have you not read that he who created them from the beginning made them male and female, and said, ‘Therefore a man shall leave his father and his mother and hold fast to his wife, and the two shall become one flesh’?” It is the same with the church. That was God’s idea and in fact Jesus said, “I will build my church and the gates of hell will not prevail against it.” The church, as God defined it in the Bible and as Jesus is building it on the earth, is here to stay, until the very end. Gravity isn’t going anywhere either, just in case you are wondering. You can test that one every day, if you like.

The wedding invitations sometimes say, “Today I am marrying my best friend.” I married my best friend 37 years ago this Wednesday. The world has changed a lot since then, but several things are still the same. The ocean is still crashing on the shore. The church is still alive and strong. Gravity is still working: I fell hard for Cindy then and I am falling in love with her more and more every day. Cindy is still my best friend and we are more committed to loving each other to the very end than we ever dreamed of in our twenties.

Marriage in trouble? Not in my house.
By Mark Fox