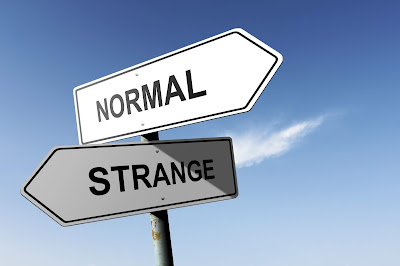 The sunrise service a few years ago was long over and it was almost time for the regular service to start. One of the little boys in the church asked me, “Isn’t it about time for the normal people to come?” I laughed as I considered a host of responses to him. There’s the comedienne’s book title that comes to mind: “Normal is just a setting on your dryer.” I thought about saying in response, “Do I not look normal to you?” But the possibility that I might get an unfiltered response deterred me. I finally just laughed and said, “Yes, I think the normal ones will be showing up soon.” He smiled and went to look for them.

This encounter made me think about what it means to be “normal.” The simple dictionary definition is “conforming to the standard or the common type.” A normal softball for play in the church leagues must conform to a standard compression. I get that. Those who have jurisdiction over the sport have chosen that standard. They can change it if they wish. The normal speed limit on the interstate between here and Wilmington is 70mph. I get that. Those who have authority over the traffic laws of North Carolina have set that speed limit. They can change those laws as they so desire. A normal temperature for a healthy human being is 98.6. I get that, too. That temperature was chosen by our Creator, and things really get messed up when it changes drastically in either direction.

A normal attitude toward the Bible is that it contains some good stories and even some important truths, but at the end of the day it is just a book, written by men, according to most. “Read it every day?” the normal people ask. “The only thing I read every day is Twitter and email.”

A normal attitude toward Christianity itself is that it is one way among many, and that any who would suggest otherwise are narrow-minded bigots who would impose their “standard of morality” upon the rest of the world. A missionary in Turkey was explaining the truth of the resurrection of Christ. He said, “I am traveling, and have reached a place where the road branches off in two ways; I look for a guide, and find two men: one dead, and the other alive. Which of the two must I ask for direction, the dead or the living?” “Oh, the living,” cried the people. “Then,” said the missionary, “why send me to Mohammed, who is dead, instead of to Christ, who is alive!”

The other “abnormal” people did show up last Sunday. Together, we worshiped the One who calls us to be anything but normal, the one who rose from the dead to conquer sin, death, and the grave.