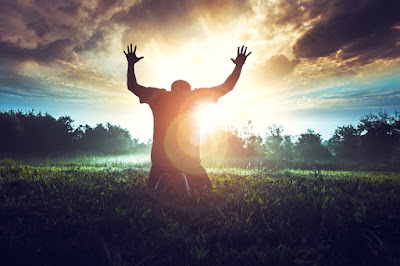 Do you make arguments in prayer? Not arguments based on strife or selfishness, but humble appeals built on sound, biblical reasoning? As I read Psalm 143, that’s something I learn from David. He did not just make his requests known in prayer, he also put arguments behind them. He appealed first to the righteousness of God, and really, that’s all we can ever appeal to. We make God laugh if we pray on the basis of our own goodness or because, well, “I really deserve this, Lord!” Imagine the thief on the cross who said, “Lord, remember me when you come into Your kingdom” instead saying, “Hey, Jesus! I am not as bad as that other guy on the cross over there. So, help me out here, OK?” Or remember the tax collector who was so broken he couldn’t even lift his eyes to heaven but prayed, “Lord, have mercy on me, a sinner.” Jesus told this parable to show that the prayer of a self-righteous man didn’t even make it past the ceiling, but the God-exalting prayer of the humble publican sent floods of God’s mercy upon him and sent him home justified. The thief and publican did what we must do: flee from God’s justice by fleeing to His righteousness.

Finally, David appeals to God by reminding him of their relationship and God’s promises. I remember the story about the man who was in a big hurry to get his wife and his baby into the car, and as they pulled onto the interstate and got up to speed, he and his wife heard an awful scraping noise on the hood and then in horror, they saw the baby carrier, with their child strapped in, come sliding down the back windshield and hit the pavement on the interstate. An 18-wheeler was behind them, but he saw the whole event happening in enough time to slam on his brakes and come to a stop just before his tires would have crushed the baby. The baby was perfectly fine. The father and mother? You can imagine. They may still be in counseling.
Now, if we could rewind to the moment the father laid his baby on the roof, and the baby could make an argument at that time, here’s what he might have said: “Dad, I am absolutely helpless here. You are my only hope right now. If you forget to put me in the car and I die on the highway in a few minutes, what will that say about you and your character and your commitment to do whatever it takes to protect your son? Dad, I need you to help me. Will you protect me?” What father, hearing that from his son, would turn a deaf ear? How much less will God do that when his children cry out to him?

Make humble arguments in prayer. As Luther said, “Prayer is not overcoming God’s reluctance but laying hold of His willingness.”
By Mark Fox