Christmas Existed Before the World was Created 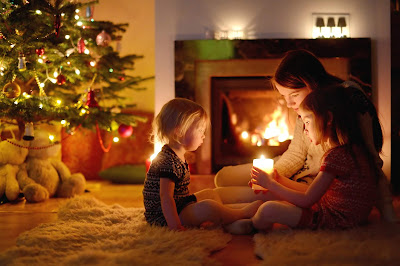 When I was little, around this time of year, I would be almost beside myself with anticipation. I could not wait for the day to finally arrive. You know which one I’m talking about. My brothers and I would try to be on our best behavior, for one month out of the year, at least, because the day was coming. We didn’t want to lose out on anything that might be under the tree or in our stocking on the day. So we kept our rooms clean. Kind of. I mean, Mom was happy as long as she didn’t open my closet door. You know, my skateboard, which I stuffed in the closet last, could fall from the top shelf right onto her head.

But we cleaned a little, and we even asked Mom if she needed help with cleaning the kitchen as she prepared for the big day. We were like little angels, my brothers and I. We would even strike up a peace accord during the month, and agree not to shoot our BB guns at each other, until after the day. There was nothing more important than the day, and that’s why, on the Eve of the Day, for one night, we three brothers would sleep in the same bed. It got to be pretty cumbersome when we were 17, 15, and 11. But it was worth it, for Christmas.

Which leads me to a question: When did Christmas begin? Was it sometime around 4 B.C., in the dusty little town of Bethlehem? Or did Christmas emerge from a pagan holiday in Rome in the first century? Maybe Christmas was created when Nicholas was a bishop in Turkey in the 4th century. Perhaps Christmas doesn’t exist at all, and we should resign ourselves to wishing each other the more benign “Happy Holidays.” One note of irony is that even the word, “holiday” is a contracted form of “holy day.” The next time the clerk wishes you one, with a smile thank him or her for helping you keep this season holy.

The truth is, Christmas did not begin in a manger in Bethlehem, but long before that. In fact, Christmas had no beginning. It always was. If we define Christmas as the coming of the Messiah, the incarnation of the Christ, the time when God took on human flesh and dwelt among us for a while, then there was never a time in history that Christmas did not exist. At least, not in the mind of God. In fact, even before time existed, Christmas was. You could go back one hundred million years before the birth of Christ, and Christmas was there.

How do we know that? Because the Bible speaks plainly on the subject. Peter wrote of Jesus, “He indeed was foreordained before the foundation of the world, but was revealed in these last times for you who through him believe in God.” In other words, it was in God’s mind to send Jesus to the earth long before God ever formed the world. He knew we would need a Savior, and there was only one available.

Remember, love is an action, a commitment of the will that results in one sacrificing for another. The Bible says that Jesus is “the Lamb slain from the foundation of the world.” Do you want to know what God gave you for Christmas? Before the world was ever spoken into existence, God gave His son, Jesus, to die for you and for me. What else can He do for you? And how do we respond to such a gift? The songwriter said it this way: