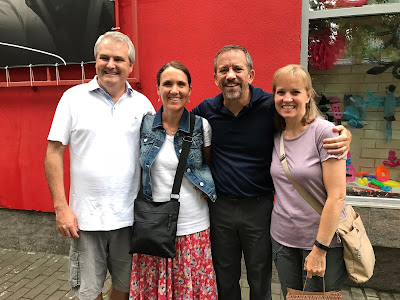 Jeff and Amy Jo Akin are good friends who moved from Burlington to Louisville, Ky. ten years ago. Jeff is a leader in the Trane Corporation, but he is also a church planter. After leading a small church for several years, Jeff heard from the Southern Baptist Convention about their emphasis on church revitalization. The more he heard, the more excited he got about it. That led to a conversation with one of the men in the SBC who is leading the charge for church revitalization, and from him, Jeff got a contact name and number. The pastor that Jeff called wanted to meet immediately, and the two men spent several hours together. Dan was pastoring an aging congregation that in its heyday had 600 people coming through the doors, and now were down to 50. Jeff and Dan met together numerous times, and then got their leaders together to plan a merger. Jeff took his fifty people and joined with Dan and his fifty, the old with the young, and now they are one year into the new work. One elderly woman told Jeff not long after the new work began, “I’ve been praying for you for 20 years.” Jeff looked surprised, since this was the first time they had met. The dear saint explained that she had been praying for two decades that God would revive her church and breathe new life into it.

Jeff shared with Antioch last Sunday the sobering statistics from the SBC. 15% of the churches report themselves to be healthy. 70% of the churches say they are in decline, and headed for death. 15% of the churches are dead, and don’t know it. 900 Southern Baptist churches die every year. The average church size in the U.S. is 50 people, so that means somewhere around 45,000 people every year lose their church home. Jeff has told me stories of churches in the Louisville area that are near death, with less than a dozen members, but who refuse to join with another church. This is not just the case with Southern Baptist churches, but with every denomination, and with non-denominational churches like Antioch. Jeff preached here last Sunday and used Revelation 3:1-6 as his text, which is a strong word on the need for church revitalization. Jesus spoke this exhortation: “I know your works. You have the reputation of being alive, but you are dead. Wake up, and strengthen what remains and is about to die.”

How can a church give glory to God?

Audubon Baptist is doing well, and experiencing the grace of God that attends any work done in obedience to the Lord. The challenges have been met with courage, and the people have risen to the call to make one out of two. They are taking seriously the command of Christ, to “strengthen what remains.”
By Mark Fox