Get the Leaving Part Right 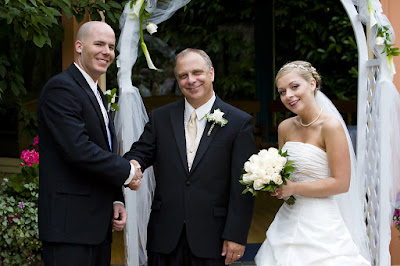 I was in line at a wedding reception several years ago when a man asked if I remembered what happened at his big day nearly 16 years earlier. I started laughing. The picture is etched in my mind of the two of us who were officiating the wedding standing in front of the two being united that day in holy matrimony. The problem was, there was a third party standing there. Right between the bride and groom. You see, the pastor who was supposed to ask, “Who gives this woman to be married to this man?” forgot to ask. As a result, the man giving the bride away kept standing there. He didn’t know what to do, and the pastor who forgot to ask the question didn’t know there was anything that needed to be done. This was only the third wedding I had officiated so I didn’t know what to do either. We were all undone.

As I recall, the bride and groom spoke their vows to each other by leaning forward and looking past the man in the middle. He was no small man, and the image of those vows being tossed across the bow at each other makes me laugh every time I think of it. An awkward situation, to be sure, but the couple came to the same end that every wedding is supposed to come to: they were married when it was over. That story has been told and re-told for these many years, and I am sure it will live on in the lives of their children’s children.

I couldn’t help but think about what that wedding scene represents for so many today who never really left home on their wedding day. Though a man in the middle of the wedding ceremony may not change anything, a mother or father in the middle of the marriage will spell disaster. You have heard these stories. Young newlyweds decide to remodel their living room. The groom’s mother hears about it, orders paint and wallpaper that she thinks would look best, and shows up on Saturday morning ready to go to work. Or a young couple with their first child decides to go to the lake for a summer vacation. When the maternal grandmother hears about it, she insists that the young man not take her daughter and grandchild to that lake “because it is not safe.” Or a young family is visiting grandparents when one of their children acts up and needs to be spanked. The young man’s father tells him he is being rash and begins to teach him, as he says, about the “proper way to discipline your children.”

Now when I officiate a wedding, I will always ask the parents of both the bride and groom to stand. Then I say to them, “You have the privilege and the responsibility to pray for (this couple), to support his leadership in their marriage, to give advice and counsel only when asked, to encourage them and take delight in their life together as husband and wife. Will you pledge to do this?” The two sets of parents don’t hesitate to promise before God and man to let this young couple establish their own household as the Lord requires.

Jesus said it like this: “Therefore a man shall leave his father and his mother and hold fast to his wife, and the two shall become one flesh.” The picture of a mother or a father sleeping between newlyweds makes us shudder. There’s no room for a third party in the middle of a marriage.

Get the leaving part right.
By Mark Fox