There’s a Way Out of the Pit 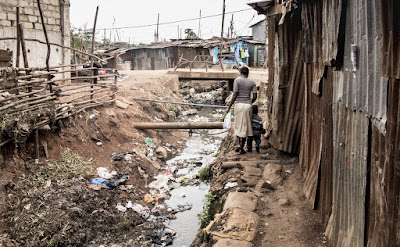 Charlie was walking through the Kibera slum in Nairobi, Kenya when his worst nightmare happened. He lost his footing and fell into the side ditch, which was filled with raw sewage. Charlie managed to spare the Bible he was carrying by holding it over his head, but the rest of him was covered. When he got back to the room where we were staying, I smelled him before I saw him. The pit he had been in, even for an instant, messed him up.

Prisons of old were sometimes just pits filled with muck and mud. Jeremiah the prophet was thrown into one, and would have died there had men not come and rescued him.

We have all been in a pit, and will most likely be in one again. Maybe our pit is not filled with mud or muck or raw sewage, but pits come in all sizes and shapes and substances. Fear or anxiety can become a pit. So can greed. Gluttony. Even self-righteousness, with proud hearts praying, “Thank God that I am not like other men.”

The real danger in being in a pit is that you can become numb to it and get to where you don’t care anymore that you are there. The people living in Jerusalem after the Babylonians had leveled the city were living in that condition. It took someone from the outside, Nehemiah, coming in and seeing the rubble, the walls broken down and the gates burned with fire to say, “Hey, you cannot live like this!” The people had grown numb to the pit.

Cold can become a pit that demoralizes men. It happened in Germany in the winter of 1944, as some of our soldiers lost heart and gave up hope in the bitter and brutal cold.

There are all kinds of pits. Tony Evans, a pastor in Dallas, said once that a few folks came to him and said, “You got some people we don’t care for coming to the church right now and we want you to know that if things don’t change, we’re out of here.” Tony said, “Bye!” Then he added, “If you stay around, I can help you deal with your heart problem, but to do that, we have to fix your feet right now.” They were convinced the pit of prejudice was a good place to stay.

Sometimes solving the pit problem starts with correcting where we allow our feet to go. The young man in Proverbs 7 fell into a pit of lust because he followed the adulterous woman to her house, “as an ox goes to the slaughter…he did not know that it would cost him his life.” Fix the feet.

Here’s the bad news. Sin always leads us into a pit, and sin is always going to be part of the story. Here’s the good news. Sin is not the end of the story. God is. He can rescue you and me out of the deepest pit. Corrie ten Boom said, “There is no pit that is so deep that God is not deeper still.”

Warning: You may well be in a pit and not realize it because your heart is dull of feeling and hearing. If Charlie had not thrown his clothes away and showered “Kibera” off of him, he would have eventually gotten used to the smell. Maybe you have gotten used to the stench of the sin-filled pit you are living in. I guarantee you that those around you have not. Ask them.

Mostly, cry out to God. He alone can pull you out of the pit and set your feet upon the solid rock. That’s the only safe place for your feet to be.
By Mark Fox