Grandchildren are the crown of the aged 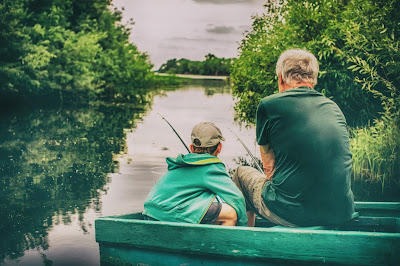 One of my favorite passages of Scripture to read at baby dedications is Psalm 128. “Your wife shall be like a fruitful vine within your house; your children will be like olive shoots around your table.” Maybe there’s a woman reading right now who bristles at the thought of being compared to vegetation, but believe me that the Psalmist meant it as a compliment.

Today in many places, even in many churches, children are considered a burden. The couple who dares to have more than the obligatory 1.2 children is met with sarcasm at best, derision at worst. I heard about one man whose wife had triplets and he decided to name them “Any,” “Minnie,” and “Miney.” When the man was asked why, he responded, “Because there won’t be no Mo.”

The last verse in Psalm 128 proclaims blessing upon blessing, as the psalmist says, “May you see your children’s children.”

I know from studying Scripture that it was the dream of every Jewish man to hold his grandchildren and help teach them about God. I had read in Proverbs many times, “Grandchildren are the crown of the aged, and the glory of children is their fathers.”

Each time I read it, I thought about how vital godly grandparents are to the family, and what an important job they have in preparing the next generation for life and service to the Lord.

Until eight years ago, though, my head was only covered with graying hair. I was still crownless.

Cindy and I are thankful to be eight years and five grandchildren into that stage of life known as grandparenthood. We join hands gladly with all of the rest of you “old people” who have held your sons’ and daughters’ children in your arms and bragged that they are just about the best looking baby you have ever seen.

We also empathize with all of you out there who have gone through the trying time of having your grandchildren decide what you will be called from now until the day you die.

I agree with Brad Stine that the one year-old who eats out of the flower pot should not be allowed to name the family patriarch. Will it be PeePaw and MeeMaw? Or Gramps and Grannie?

I put my request in 8 years ago for “O Captain, my Captain,” but it fell on deaf ears. Micah and Kari wanted to wait until Blake was old enough to talk, to see what he came up with as he attempted to say, “Nana and Grandad.”

It seems to be official, now. We are “Nana and Gan-Gan.”

I told Blake, who turned 8 this week, that he is plenty able now to say “Grandad.” He grinned and said, “Sure thing, Gan-Gan!” Of course, his two-year-old sister is way confused; Liza calls me “Dan-Dan.”

Nonetheless, Cindy and I welcome the honor we have been given to love and nurture 5 grandchildren, and all the others who will follow, as the Lord gives His precious gift of children to our children.

OK, grandma and grandpa, what are you going to do with your grandkids? Teach them how to catch a fish? Throw a ball? Drive a car? Work hard and enjoy it? Be polite? Respect other people? Obey their parents? Those are excellent lessons.

While you’re at it, teach them one thing more. Teach them to love the Lord. Better yet, show them how you do it. They will never forget it.
By Mark Fox