Walk in the light you have received 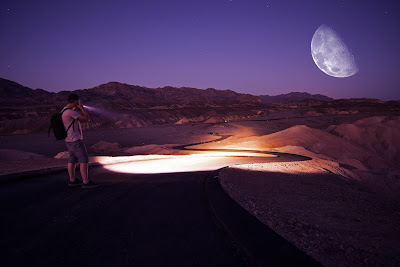 I remember one Christmas back in the mid-1980s. I cut down a cedar tree in the woods and dragged it into my living room. I put it in the tree stand, which proved to be a bit too wimpy to hold up the sturdy evergreen. So I went outside to get a couple of cinderblocks that I would place on the legs of the tree stand, to give it support. I knew exactly where the blocks were. My mind argued with itself about taking a flashlight into the dark night. “You know where the blocks are; they are not hidden,” one side reasoned. “Yes, but it’s dark out there. You need to see where you are going,” the other side answered. I won the argument with myself ... or maybe I lost. Nonetheless, I struck out into the dark wilderness of my backyard and made my way to the stack of cinderblocks. Having reached my destination without a problem, I congratulated the winning side of my brain for having the foresight to leave the flashlight back in the kitchen drawer. I then picked up two of the blocks and lugged them to the back stoop, where I set them down in the light to inspect them for dirt. That’s when I realized that about two inches from my ungloved right hand, inside one of the cinderblocks, was the healthiest black widow spider I had ever seen. Perhaps she had just eaten her husband and was still bloated from the heavy meal, but for whatever reason, I was spared an attack.

I learned a valuable lesson from that close encounter with a venomous arachnid. Would you like to know what it was? You might want to get a pen and write this down, because this kind of profundity only comes ‘round once in a great while. Here it is: “The light does you no good if you do not use it.”

That’s it. Simple, I know, but in the words of the old country preacher, “That dog will hunt.” You see, a flashlight is useless in the drawer. Headlights are worthless if you don’t turn them on. A front porch light is dangerously without purpose if you throw a T-shirt over it. I learned that lesson the hard way as a teenager when I wanted to have some "private conversation" with a girl on her front porch. Her Daddy was not a happy camper when the smoke from my smoldering shirt smote his nostrils in the living room.

Jesus said it like this: “Men do not light a lamp and put it under a basket, but on a stand, and it gives light to all in the house.”

Walking in the light of the truth you have received greatly improves your vision. You can see better when you follow Christ. That doesn’t mean he will not lead you through hard times, narrow places and difficult spots. There are dark valleys where we cannot see the next step and must walk by faith and not by sight. But there are also times when we are in the dark because we choose to be there. He has given us the light of understanding but we have chosen to reject it or neglect it.

The old saying is true, that God will only give more light to the one who is walking in obedience to the light that he has already received. That’s where I want to live, in the light. It keeps me honest. It might keep my hands away from poisonous spiders, as well.
By Mark Fox