Leave this spidery habit behind 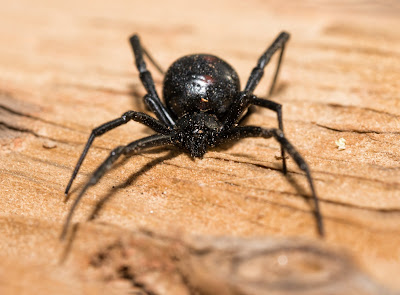 Here’s a question for you: How is a slanderer like a spider?

In his book, "Ragman and Other Cries of Faith," Walter Wangerin starts one story with a lesson about eight-legged arachnids. He explains that a female spider is often a widow for embarrassing reasons — she eats her spouse. In fact, the female spider regularly eats all who wander her way, making her dining room a morgue. If you see an immobile fly that is caught in a spider’s web, most likely it is only a shell. The fly is still hanging around for decoration, but he’s been consumed. His insides have been drunk by the spider, which has no stomach, making it incapable of digesting anything. Through tiny punctures, the spider injects her digestive juices into its prey, until its insides turn into a warm soup. “This soup she swills, even as most of us swill souls of one another after having cooked them in various enzymes: guilt, humiliation … cruel love. And some among us are so skilled with the hypodermic word that our dear ones continue to sit up and smile, quite as though they were still alive.”

A gruesome picture, wouldn’t you agree? It is an awful thing to suck the life out of others with our snipes, our sneers, our stares, or our stony silence. By definition, to slander someone is to maliciously utter false statements that damage that person’s reputation. If you take the time to look up slander and its twisted sister, gossip, in the Scriptures, you will be amazed. Maybe even changed. Slander is mentioned repeatedly as a sin we must put way. The regular use of gossip and slander is associated with those who have a debased mind, and are “haters of God, insolent, haughty, boastful,” and so on. One biblical admonition against slander could be literally translated, “Do not speak down on one another.” That’s a good picture, because for me to speak down on another means I have assumed a lofty position above him. One way we all slander is when we assign a motive to someone’s behavior, speaking as if we know his or her heart. “Well, the only reason she is here is to be seen. She absolutely craves the spotlight, you know.” Or, “I know why he’s late; he is lazy.” We almost always ascribe circumstances to our misdeeds, while ascribing character flaws to others. “I overslept because the alarm wasn’t loud enough. Today. For some reason. But he overslept because he’s soft. Coddled. Immature.”

Gossip is the companion of slander, but it can include truth. It is the deadly art of confessing other people’s sins, where it is supposedly safe: behind their backs. Here’s an idea on stopping the habit: refuse to listen to it yourself. It starts this way, “You know I am only telling you this because it’s true.” Or, “Let me tell you what I heard about her, because, of course, she needs our prayer!” As soon as that trigger is pulled, politely refuse to hear another word. Walk away from your stunned friend knowing that the one who brings you a tale about another will bring tales to others about you. Be the stopper. The goalie. Change the culture one person at a time. Of course, that means you will have to refuse to utter gossip about others, lest you be found a hypocrite.

The female spider will not eat her spouse if he’s bigger than her, providing us a great illustration of how we stop acting like cannibals with our speech. We simply must esteem others as more important than ourselves.

Sounds biblical to me.