Don't fall asleep at the wheel 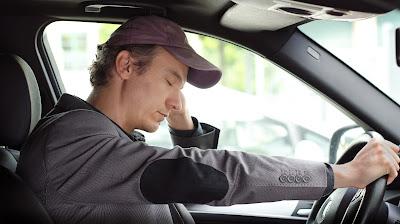 I worked at IBM for a summer when I was in grad school and had to be there at 4:45 a.m.

I left my apartment in Chapel Hill at 4:00, and I can remember a few mornings when I was asleep at the wheel while I drove. It was God’s mercy that kept me alive. I woke up once while passing a car on Highway 54. Had there been a car coming the other way during my little nap, I shudder at the thought of what would have been lost, including the life of the oncoming driver. I would not have met my lovely bride, enjoyed 34 years of marriage, watched 7 children grow up, or held five (so far!) grandchildren in my arms. All would be lost because of one second of inattention. Some of you will remember the Hudson River crash of 2009. Nine people were killed when a single-engine Piper collided in mid-air with a Liberty sightseeing helicopter. The air traffic controller had stepped out of the tower to talk on his cellphone with his girlfriend. The supervisor was not in the tower, as required by law. Both of these men took a break, just for a brief moment, and that’s all it took for families to be destroyed.

Falling asleep unintentionally is one thing. Pursuing a lifestyle that keeps you in perpetual stupor is quite another. Jesus said, ““But watch yourselves lest your hearts be weighed down with dissipation and drunkenness and cares of this life, and that Day come upon you suddenly like a trap.”

There is a real temptation, in other words, to deal with the hardships of life by checking out, intentionally throwing yourself into full party-mode, living for the moment, ignoring the warning signs until you swerve over the center line and into a head-on collision. Some of you scoff at the idea, completely confident in your ability to avoid the collision, to live to satisfy your every craving without a problem. May I remind you that the “Day” is coming? It comes for every man. He says, “For it will come as a snare on all those who dwell on the face of the earth.” Nothing ever caught in a snare meant to be there. No person in his right mind swerves on purpose into oncoming traffic. No one tries to catch a nap while driving 75 on I-85. It just happens. Jesus says it will happen to all of us one day: death will come and then we will face the final Day.

May I say this to all of you who follow Christ? You may have spent a lifetime building a testimony to faith in Him, but it just takes a split second to lose it all. One second you are awake and alert, and the next second you have fallen asleep in the arms of adultery or bitterness or drunkenness or deceit, and all is lost. Watch! Stay awake. By the way, I have never fallen asleep in the car while I am talking with someone else. We need help to stay awake. Do you have someone in your life that is willing to nudge you, or worse, when you start to drift off? I would suggest that’s what the church is for, in part. I am surrounded by a number of men who love me enough to tell me the truth, and I do the same for them. It’s a wonderful means of grace that keeps us on the road.

Don’t fall asleep at the wheel. The price is too high.
By Mark Fox