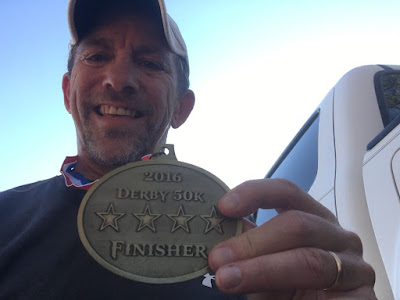 Just for fun, I ran a 50K ultra-marathon last Saturday. No, it wasn’t a mid-life crisis thing. I’m way too old for that. And no, nobody was chasing me, except the slow, graying guy who stares at me in the mirror every morning as I shave. This was just something I wanted to try, especially since a man named Mark who has run several ultras started coming to the church last year. He told me about this one, convinced me that I could do it, and we started to do long runs together every week as part of our training.

The run started and ended at the Derby Community Center which is “in the middle of nowhere,” as the race website stated. It also says, “This is a very low key, no frills race.  If you are expecting port-a-potties, expos, or to be waited on, I suggest you stay home.”

We did three laps of 10.5 miles each, on mostly paved roads and a two-mile stretch of a sandy road. Derby is in the sand hills (emphasis on “hills”) of North Carolina, not far from Ellerbe and Pinehurst. I expected the course to be fairly flat, and my running buddy assured me that it would be. Until we were almost through with our second lap, somewhere around 18 miles and Mark turned to me and said, “This course has a LOT more hills than I remember.” I grunted something back, lacking the energy to form a full sentence at that point.

Here’s the story of lap one. The day was beautiful and the weather was perfect. The sun was shining, the wildlife was plentiful, the temperatures stayed in the 40’s or 50’s, and the runners were happily talking in small groups as they ran. Very few of us were walking up the hills on lap one (big mistake), and I had the fleeting thought at about mile 9 that the pace we were keeping was going to come back to bite us in the end.

Lap two began hopefully, and we decided to run halfway up all the hills and then walk to the top of each. The runners by this time (there were only 63 of us) were spread out more, and friendly chatter had given way to deep contemplation, or something like that. I tried to listen to a podcast at about mile 14, but couldn’t concentrate enough to enjoy it.

When we completed the second lap, I said to my buddy, “Mark, you have no idea how much I would like to quit right now.” We had completed 21 miles and I just could not imagine running or even walking another 10.5. My legs ached, my feet screamed at me, my toes throbbed. All the while, my mind told me that a chair and a hot meal were just twenty feet away. All I had to do was quit. But on we went; we had not come to Derby to stop short of a 50K.

I have never been as happy to cross a finish line as I was that day. As I hobbled toward the community center for spaghetti, I met a 72-year old who came in about five minutes ahead of me. But this was not his first ultra, as it was mine. It was his 340th. And he had just run 92 miles in a race one week earlier. I hobbled more slowly towards the chow hall after hearing that. Talk about perspective.

The Bible says of those who pursue God’s wisdom, “…if you run, you will not stumble.” He promised nothing about pain.