Faith is obeying God in spite of consequence 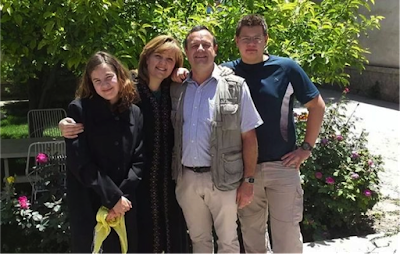 Someone has said that faith is not “believing in spite of evidence but obeying in spite of consequence.” Abraham did that. He left his home at God’s command, and went to a place he knew nothing about. He obeyed God when he was told to take Isaac as a boy and sacrifice him on an altar. If you don’t know the story, read it in Genesis 22, and see how God stopped Abraham from carrying out the deed, but saw in his heart that Abraham loved God and believed that even if Isaac were slain, God would resurrect him to be the son of promise. Abraham obeyed in spite of consequence.

That’s the story of the Groenewald family. Werner Groenewald was a South African pastor, married to Hannelie, a trauma doctor. Inspired by the terrorist attacks on the United States in 2001, Werner and Hannelie began to seek the Lord about how and where they should live. When they visited Pakistan and Afghanistan with a medical team in 2002, the direction of their lives was forever changed. Hannelie said, “We felt the touch of the Holy Spirit. I just started crying and knew that Afghanistan or Pakistan, wherever the Lord calls you, can be your home.”

In August of 2003, the Groenewald family moved to Afghanistan with their son Jean-Pierre, 5, and their daughter Rode, 3. Their families thought they were crazy to leave South Africa and move to this war-torn country where they knew they could be killed. But the certainty of their call and the support of their church gave them courage.

They served in Afghanistan for 11 years, she as a doctor and he as a teacher. On Nov. 29, 2014, Hannelie was working at the clinic, and Werner was teaching leadership to Afghan students in his home. Jean-Pierre, 17, had been playing guitar in his room and chatting with friends on social media. Rode, 15, had spent the day crocheting, and working on her computer. Late that afternoon, Afghan rebels broke into the compound where the Groenewalds lived. Confronted by the guard, the rebels shot and killed him. When Werner heard the shot he sent his students to another room to take shelter, and began to climb the stairs to protect his children. As Werner ascended the rebels burst in and shot him three times, killing him. The rebels then killed Jean-Pierre, Rode, and most of the Afghan students who were hiding throughout the house.

Hannelie says nearly two years later, “It is well with my soul.” Though finding this peace was not easy, she knows God was always there for her family. She remembers Werner’s words just a month before the attack: “We die only once. It might as well be for Christ.” Hannelie said that her only regret was that she wasn’t there with her family when they died. “I wanted to be there, especially with the children, to just embrace them and hold them and face the bullets.”

Hannelie continues to share her testimony with anyone who will listen; and looking back on her family’s journey, she says she wouldn’t change a thing. “We had a clear calling. We had a mandate with this; we counted the cost. We knew that something like this could happen. God allowed that for a reason.” Then she said, about her family members who had been killed, “I know they are actually chasing me on to finish the race as well. I believe one day Jean-Pierre will say, ‘Mom, what took you so long to get here?’ I believe they are where they are supposed to be, on Jesus’ lap, and I cannot wait to get there as well. But I have to finish this race for the Lord.”
By Mark Fox

Hello PASTOR Mark Fox. I am also a Pastor from Mumbai, India. I am so glad to stop by your profile and blog post on "Faith is Obeying God in Spite of Consequence". Very encouraging and enriching post. I am blessed to go through it. I am also blessed and feel privileged and honored to get connected with you as well as know you through your profile on the blogger and the blog post. I love getting connected with the people of God around the globe to be encouraged, strengthened and praying for one another. I have been in the Pastoral ministry for last 37 yrs in this great city of Mumbai a city with a great contrast where richest of rich and the poorest of poor live. We reach out to the poorest of poor with the love of Christ to bring healing to the brokenhearted. We also encourage young and the adults from the west to come to Mumbai to work with us during their vacation time. We would love to have your young people come to MUMBAI to work with us during their vacation time. I am sure they will have a life changing experience. My email id is: dhwankhede(at)gmail(dot)com and my name is Diwakar Wankhede. Looking forward to hear from you very soon. God's richest blessings on you, your family and ministry. God willing I will be coming to the United States in the month of April/ May 2017 and will be very happy to stop by your place and share more about the ministry and the opportunity for your young people.