The Lord came to Mohamed 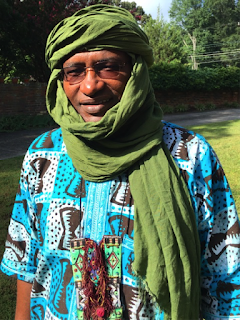 Mohamed-Ibrahim Yatarra was born and raised as a Muslim in Mali, West Africa. The oldest of 14 children, at 5 years old he was sent to school to learn the ways of Islam and to study the Koran. His father was a schoolteacher, and a strict disciplinarian. Mohamed remembers watching his friends playing soccer outside on many afternoons when school was over, while he was kept inside, studying. When he was 14, Mohamed ran away from home and fled to his uncle’s house, in another city. His uncle was a Christian pastor and, surprised to see Mohamed, he welcomed him to join the family for lunch and said, “Before we eat lunch, we will pray.” Mohamed was impressed but shocked by this. He had been taught that Christians never pray and are evil people. But during that week, he heard their prayers and was moved by them. He saw their devotion to Jesus and was drawn to it. He participated in a Vacation Bible School at his uncle’s church and learned many Bible verses and songs about Jesus. The teaching impressed him, but at the end of the week when the invitation was given, he did not go forward. He told himself, “Mohamed, this is not for you.”

When the week was over, his uncle told Mohamed that he needed to go back home. When he returned, his friends came to see him, and the first thing he did was take out the New Testament his uncle had given him and he started reading to them. He was not a Christian, but wanted to explain to them what he had seen and heard. His father was listening and became very angry, and sent him back to the Koranic school, telling him that maybe this time he would learn how to be a good Muslim. “My father was trying to brainwash me,” Mohamed said, “and it worked.” He forgot his sidetrack into the Bible and studied the Koran. Two years later he was sent to high school in the same town where his Christian uncle lived, so he stayed in his house. Once again, he was drawn to Christianity, and found himself torn between the religion of his father and the faith of his uncle.

He read Muslim books and Christian books trying to understand, and would often defend Jesus to his Muslim friends. “I was very confused,” he said in his testimony at Antioch last Sunday, “because I also defended Islam to my Christian friends.” One night, he prayed, “God, I want to know the truth. Is it Islam? Is it Christianity? Maybe there’s another religion, I don’t know. I just want to know the truth.” Immediately he remembered a Bible verse he had learned four years earlier at Vacation Bible School: “He saved us, not because of works done by us in righteousness, but according to His own mercy.” That night, the Lord came to Mohamed, and this young man’s faith was settled once and for all.

His father disowned him when he heard of his conversion, but Mohamed continued to visit his father to show him honor. After his marriage, he asked if one of his younger siblings could come and live with him and his new wife, but his father said no. “You will try to make him a Christian.” A year later, his father passed away and since Mohamed was the oldest son, he was given the privilege of raising his younger 13 siblings. Today, all but two of them are following Jesus.

The Lord came to seek and save the lost. In every nation.
By Mark Fox