He chose me despite my weakness 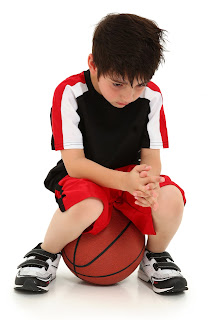 I remember it like it was yesterday. It is my fourth-grade class with Mrs. Wade and time for recess. Every day, it is the same. When the teacher announces recess, I am at once fearful and elated, filled with dread and excited at the same time. Why? I am excited and elated because I get to go outside and play, one of my passions even to this day. I am fearful and filled with dread because I am one of the smallest boys in the class, and I know that recess means kickball. I know that kickball means that the two biggest boys in the class will announce that they are captains and start choosing their teams. The girls will stand off to the side and giggle as the boys make their selections from among the rest of us young pre-pubescent males who are standing there, trying to look tough and athletic. Not me. I am standing behind a row of taller boys, and occupying my full attention by gazing at my right foot. Anyone who is observing this whole scene would have to write in his notes: “The short, skinny kid, Fox, is staring at his right sneaker like it’s his job. What is going on with him?” What is going on is that I know what will happen. Every single boy on that field will be chosen until there are two left, me and this other little kid named Albert or Edgar, I can’t remember. Then the two self-appointed captains will argue over who gets me and who gets the other kid. The girls on the sideline, in the meantime, are whispering to each other and giggling into their hands. I am dying. The selection process is finally over, and the game begins, and I can relax and go hard after every ball. I always tried to make up with hustle and effort what I lacked in size and skill.

When Jesus came to his hometown to preach there for the first time, he opened the Old Testament to Isaiah and read a passage about the coming Messiah that included this statement: “He has anointed me to proclaim good news to the poor.” This is not an economic designation, this word for "poor." Rather, it is a word that points to “those who for any number of reasons were relegated to positions outside the boundaries of God’s people.” Jesus came to proclaim good news to people who knew they were outside of God’s boundaries - all of us are - and who knew they were lost and needed a Savior - all of us do.

I am back on the kickball field, and I expect to be picked last. In terms of size and skill, I am poor, outside the boundaries of those who would be included in the athletic category. And then one of the captains overlooks a whole row of bigger, stronger boys who are smug in their expectation of being picked first. He finds me through the crowd, standing on the back row, looking at my feet, preparing myself to deal with the shame of being picked last or next to last. And he says, “I’ll take Mark.”

Of course, it never happened to me in kickball. I still got picked last. But it did happen to me with the Lord. He saw past all my sinful pride and rebellion and said, “I’ll take Mark.” He preaches the gospel to the poor, to the least likely, to the lowly. He proclaims good news to people like you and me.

Wow! ...Mark, I couldn't believe my eyes. --That Elementary School "small kid" situation that you described, was almost my exact experience ...and a few times for me, the choosing was completely done, and the boys went out to start the game ...with me still standing by the sidelines. --But Jesus chose me too; by his wonderful love and grace. Today, I too am a pastor. -- I am the dad of Jared T, who also has written articles for this Christians in Context blog. --The Lord bless you greatly my friend in Christ! - Rhett Totten

Thank you, Rhett! As you can see, I check the comments on this blog about every three months, whether I need to or not. :)
Anyway, thanks for the comment, and I bet we share that experience with multiple thousands of people. I praise God for His grace!