Evidence God is working in Moldova 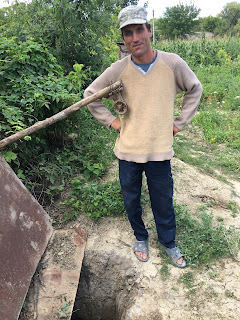 Kevin Jordan and I had the privilege of preaching in four churches and presenting five seminars in Moldova last week to men, encouraging them to be spiritual leaders at home. Situated between Romania and Ukraine, Moldova is the poorest country in Europe and struggles mostly because of corruption in the government, not because of a lack of resources or a poor work ethic. Here are some of the things we observed in this former Soviet state.

The people are hospitable. In one village, we brought a pack of large diapers to a woman who cares for her 12 year-old grandson. A mistake by the doctor who delivered him left the boy disabled, and he cannot walk, talk, or care for himself. After we spoke with his grandma through an interpreter, and prayed for them, she insisted that we eat some fresh goat cheese she had made that morning.

The people of Moldova are hard-working and the men want desperately to provide for their families. We met Victor and Svetlana and their three children, and helped him with a well he is digging for his family. As we wrestled with two concrete sleeves and finally managed to drop them into the well, Victor led the way, despite having a ruptured disc in his back. His teenage son gladly chopped firewood to build a fire in their outdoor kitchen, so that Svetlana could serve us tea. Several years ago the temperatures dropped to 35 below in Moldova, and did not get above zero for more than two weeks. I imagined this proud family, living in a house with clay walls, a clay floor and a porous roof, trying to provide food for the family in the sub-arctic outdoor kitchen.

The evangelical church is making a difference. The state church is Orthodox, and you can see their domes and crosses on beautiful church buildings in even the poorest of villages. They are everywhere. And nowhere. The Orthodox priest in Victor’s small village has never come by to meet them or pray for them. In fact, if you want the priest to pray for you in Moldova, you have to pay. Instead, the pastor of “Jesus the Good Shepherd” church came from miles away and went door to door with his people in Victor’s village where there is no evangelical presence. They were impressed to help Victor and Svetlana, not because this family may be able to ‘come to their church one day,’ but because they wanted to show them the love of Jesus and help them in His name. Victor and his family are not believers.

In Moldova, everyone will tell you he is a Christian. The Orthodox Church is predominant, even though only handfuls attend each Sunday. If you ask Moldovans if they are believers, the vast majority will say no. In fact, when a family in a village comes to Christ, they are labeled ‘heretics’ by the Orthodox Church, and therefore by their neighbors. The primary religion is works-based, and a mix of tradition and superstition. Those who have heard the Gospel, that Jesus did everything necessary on the cross for our salvation, and therefore we are saved by grace and grace alone, are few. But that number grows.

We saw much more than this, but space does not permit me to tell it all. Want to hear more? Come to Antioch on Sunday morning, Aug. 21 at 10. We will share pictures, videos and stories about this country and her people.

I thank God for the privilege of serving in Moldova. He is at work there.
By Mark Fox