I was safe, and then I was out 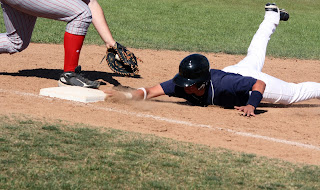 The lady at the ER asked me if I was safe. That was after I explained why my right ring finger was bent in an unnatural way, like the two bones met at the knuckle and decided one would go right and the other would go left. Hey, it’s an election season. It looked like that because I was on first base during a church softball game when the next batter hit a line drive toward the second baseman. I thought it was going to get past him, so I took several steps off the bag and watched as he caught it and wheeled to throw back to first. Not wanting to be ‘that guy,’ I dove toward the bag. The ring finger on my right hand collided with the bag, and my finger popped out of joint, causing confusion in its ‘direction’ and intense pain for its owner. Anyway, the lady asked if I was safe, and when I nodded she said that was all that mattered. I was safe. But then I was out. Out of the game and headed to the hospital.

The nice lady at the ER then asked for my ID, which was a problem. I had ridden to the game with my son, and then left the game with my daughter to go to the hospital, and my wallet and ID were at home. I told her I didn’t have my license with me but, waving my phone, I offered to take a selfie and show it to her. She laughed out loud, and genuinely seemed to appreciate my attempt at levity. I’m guessing there’s usually not a lot to laugh about at the ER on a Friday night.

Two sets of X-rays, a visit with Chris the orthopedic PA, a shot of painkiller and a simple yank to bring about ‘reduction’ (medical-speak for putting the finger back into its proper place), it was done. We walked out and my youngest drove the old man home from the hospital.

Because my ring and middle fingers have to be buddy-taped for a while, I have gotten lots of questions about it. When I tell the story, the question is universally asked: “Were you safe?” It made me think about the life of the followers of Jesus around the world.

There are 51 countries (out of 166 on the earth) where it is either illegal or very dangerous to profess faith in Jesus Christ. A North Korean pastor was murdered on April 30. Hindu radicals attacked a church in India on April 15, sending one young woman to the hospital for an emergency C-section. Tohar Haydarov, a 33-year old convert from Islam to Christianity is serving a ten-year sentence in an Uzbekistan prison. Grace was married to a Muslim in Uganda, but when he died she converted to Christianity and refused to marry her husband’s brother and practice Islam. Her husband’s family twice has threatened to kill her and her daughter. Multiply these stories by the tens of thousands, and you will get part of the picture. Go to Voice of the Martyrs’ website to read more. (www.persecution.com)

Persecuted Christians are suffering greatly. But they are safe. Jesus said, “I have said these things to you, that in Me you may have peace. In the world, you will have tribulation. But take heart; I have overcome the world.” Those who walk with Jesus will suffer. But they will always be safe. Even when they are taken out of the game completely.
By Mark Fox