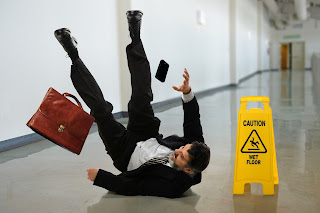 One night Cindy and I were reading in bed and suddenly heard a noise coming from the kitchen. We looked at each other, and then back toward the family room, trying to figure out what it was. It sounded like water spraying, so I walked into the kitchen with my head cocked, trying to locate the source of the sound that grew louder as I approached the refrigerator.

I had already made up my mind that the noise was coming from the laundry room, so I hurried past the refrigerator. As I did, my feet hit a wet spot on the hardwood floor and flew out from under me, and I landed flat on my back in a puddle of water. The tube for the ice maker had come loose behind the refrigerator and water was spraying everywhere. I had placed my faith (and my feet) on that floor, expecting it to hold me up as it always had, but this time I was wrong. Something had changed the floor that I did not know about or see, and a sore back was my punishment.

I am reminded of the story about a man wanting to paint his shutters, but in order to get to the highest ones on the back of the house, he had to rig a support system. He tied a rope to the bumper of his car which was parked in the front drive, and ran the rope over the roof. He tied the rope around his waist and began to paint the back shutters, secure in the knowledge that the car would support his weight should he slip on the steep roof. What he had not figured into the equation was that his wife may decide to go to the store. She got in the car, didn’t see the rope tied to the back bumper, and began to drive off, wondering why the car seemed so sluggish!

Both of these stories illustrate a point: our faith is only as valid as the object in which it is placed. There are many who say they believe in Jesus Christ, but only the Jesus who was a “good man,” not the Jesus who was and is the only hope for mankind, for “there is no other name under heaven given among men by which we must be saved.” Some even try to change Jesus to fit their politics, claiming that He “evolved in His understanding of human nature,’ or that He became more “tolerant of sin.” That’s not just slippery ground, but dangerous and heretical teaching that denies the truth and gives false hope to those who take a stand there. Of course, there are countless others whose faith is placed in their intellect, their money, their political party, their own ‘goodness,’ or in something else that is equally slippery.

When the missionary John G. Paton was translating the Bible in the New Hebrides, he was looking for a word in their language that would work for “believe” or “trust.” He found it in the native word that meant, “to lean your whole weight upon.” That’s what I did in my kitchen that night: I put my whole weight on a floor that would not hold me up because something else had crept in uninvited.

Faith is only as valid as the object in which it is placed. The good news is that Jesus Christ is the solid rock, the cornerstone, the firm foundation. Take a stand there, in the biblical Jesus. Whoever believes on Him will not be put to shame.
By Mark Fox