The freedom of telling the truth 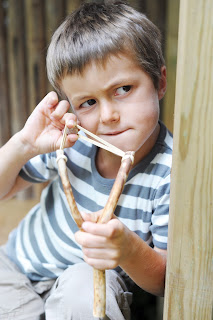 Johnny was visiting his grandparents with his sister and sporting a brand new slingshot. The first thing he did, after hugging grandma, was run into the woods to target practice. But he couldn’t hit a thing. The stone would fly left or right of the soda can every time. Frustrated, Johnny trudged through the woods and into his grandma’s back yard, where he spied her pet duck. On an impulse he took aim and let fly. The stone hit, and the duck fell dead. Johnny was immediately filled with shame and dread. He hurriedly hid the dead duck in the woodpile, only to look up and see his sister watching. Sally had seen it all, but she said nothing.

After lunch that day, Grandma said, “Sally, let’s wash the dishes.” Sally replied, “Johnny told me he wanted to help in the kitchen today. Didn’t you, Johnny?” She cut her eyes at her younger brother as she whispered slyly, “Remember the duck!” Johnny did the dishes.

That afternoon, Grandpa announced that he would like to take the children fishing down at the old mill pond. Grandma said, “I’m sorry, but I need Sally to help make supper.” Sally smiled and said, “That’s all taken care of, Grandma. Johnny wants to do it.” Again she whispered, “Remember the duck.” Johnny stayed behind to peel potatoes while Sally went fishing. This went on for several days. Johnny did his chores and Sally’s as she kept him pinned down with her ominous threats.

Finally, Johnny couldn’t stand it any longer. He was hassled by his sister, but more than that, he was burdened by his guilt. He confessed to his grandma that he’d killed the duck. “I know, Johnny,” she said, giving him a hug. “I was standing at the window and saw the whole thing. Because I love you, I forgave you. I wondered how long you would let Sally make a slave of you.”

I met an inmate once in a youthful offender prison (for men, ages 18-25) who confessed to me that he had committed a crime the authorities didn’t know about. “I will be released in 9 months if I keep my mouth shut,” he told me. “But if I confess to this other crime, I may be here for 5 more years. What should I do?”

My mind immediately went to what the Bible says: “He who covers his sins will not prosper, but whoever confesses and forsakes them will have mercy.” I read that to my new friend (I’ll call him John) and spoke to him about the guilt that was weighing him down. “John, you may be released in 9 months if you cover this sin, but you will not be free.” He looked at me intently. “But if you confess to this crime, even if they keep you here 5 more years, you will be a free man with a clear conscience. Which do you want to do?”

I remember walking out that day, rejoicing over the mercy of God and the fellowship of a new and free brother in Christ. God calls the bound to confess and be made free, while those who think they’re “free” continue to stumble in the darkness of their willful bondage. He asks the sick to come for healing, while those who think they are “well” shrug off their pains and salve their wounds as they sink further into self-righteousness. He exalts the humble while pulling down the exalted. He sets the captives free, and those whom the Lord has set free are free indeed.
By Mark Fox