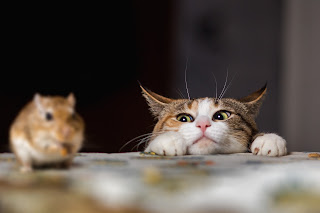 As the saying goes, “When the cat’s away, the mice will play.” I’ve never seen mice play, but whenever we’ve had a cat that’s worth anything, we don’t see mice at all. And . . . is there any other reason one would want a cat?

Anyway, the idea is that when the cat is gone, the mice reappear. It can happen at school. When the teacher is gone and the substitute is there, the students are much more likely to run the classroom. It can happen at home, as well. When a babysitter replaces the parents, things often go awry. Ask my older daughter. Several years ago while she was babysitting, a boy called her to the bottom of the steps, as he stood out of sight above her. When she looked up, he poured a pitcher of water on her face from the second floor landing. Things went south sometimes at our house, too, when mom and dad would leave. The children knew how to behave; we had worked with them on loving each other and being quick to say they were wrong when they hurt one of their brothers or sisters, and letting others go first, and on and on. Then we would go on a date and leave one of the older ones in charge. Thirty minutes later, we would get a phone call from one of the kids saying the older brother in charge was torturing them, slowly, or that one of the kids was holding the rest for ransom. Not really, but that’s the way I remember it. When the cat’s away, the mice take over.

It was true in Jerusalem. When Nehemiah left, things began to deteriorate. He had served as governor for 12 years, and during that time, the wall was rebuilt, the Word was brought back to the center of the people’s lives, worship and giving were restored, the city was repopulated, families were strengthened, and God was honored. Nehemiah did not take credit for any of that, but his leadership could be summarized with his statement in chapter two: “The God of heaven will make us prosper, and we His servants will rise and build.”

When Nehemiah left, the people went back to business as usual, and even worse. The high priest invited Tobiah, the leader of the triumvirate who had opposed the Jews in building the wall around Jerusalem to come and live in the temple. This pagan enemy of the Jews was now living in a room in the house of God, the God he scorned and opposed at every turn!

How do we get to the place where we are inviting the enemy into places in our lives where he doesn’t belong? It happens gradually. You start believing what other people say, that maybe we are taking this ‘Christian thing’ too seriously. And maybe we don’t need to be THAT particular about what the Bible says. And maybe they’re right when they say all religions are the same. And maybe it’s true that there’s really nothing special about Jesus Christ the Nazarene, and . . . when you get to that point, it’s time to turn off the lights and go home. Or take action.

Nehemiah took action immediately and began to set things in order. He threw Tobiah’s furniture into the street and ordered the chambers to be cleansed and used again for their rightful purpose. He replaced unfaithful leaders with people he could trust. He brought back the Levites and restored worship to Jerusalem. And he gave thanks to God.