We were fashioned for faith 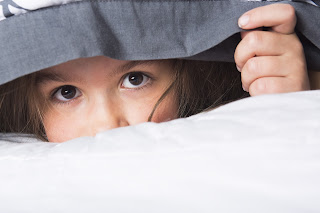 One summer night during a severe thunderstorm a mother was tucking her small son into bed. She was about to turn the light off when he asked in a trembling voice, “Mommy, will you stay with me all night?” Smiling, the mother gave him a warm, reassuring hug and said tenderly, “I can’t, dear. I have to sleep in Daddy’s room.” A long silence followed. Then the little boy replied with a shaky voice, “The big sissy!”

I can feel that little boy’s pain. I remember very well lying in my bed at night, peeking out from under the covers at the closet, where I was certain a bogeyman was hiding. He was just waiting until I went to sleep before he would come out and do terrible things, like mess up my room or play with my toys. I remember always having to sleep with some kind of cover on me, even if it was just the sheet. My thinking was that if I were attacked by someone in the middle of the night, like the guy in my closet after he was finished with my toys, the sheet would protect me from harm. Of course, I would never, ever let my hand or foot hang over the edge of the bed as I was lying there. That would have been all the other bogeyman needed, the one who was hiding under my bed. He was lying down there every night just waiting for that hand or that foot to be flashed for just a split second. He would grab it if I gave him the opportunity, pull me off the bed and then it would be on. I went over and over in my mind the moves I would put on him if he grabbed me, how I would use the suplex or something else I had learned on Mid-Atlantic Wrestling, and that guy would be toast. I was scared to death, but I was not helpless. Chief Wahoo McDaniel and Dusty Rhodes had taught me well.

As I grew older, my fears changed. Now it wasn’t the bogeyman that kept me awake at night. I hardly ever thought about him lying in wait under my bed. I knew that if he ever managed to slide out of there he would be so covered in dust that I would have plenty of time to escape his clutches as he sneezed and wheezed and struggled to breathe. No, my fears as a teen were about tests and papers and sports and fitting in at school.

These days my fears are that I will not finish well. Or that one of my children will walk away from the Lord. Or that we will get the president we deserve in November, instead of the one we need. Whoever that is. Most often, though, I am reminded that the Lord has not given His children “a spirit of fear, but of power and love and self-control.”

Dr. E. Stanley Jones said, “I am inwardly fashioned for faith, not for fear. Fear is not my native land; faith is. I am so made that worry and anxiety are sand in the machinery of life; faith is the oil. I live better by faith and confidence than by fear, doubt and anxiety. In anxiety and worry, my being is gasping for breath—these are not my native air. But in faith and confidence, I breathe freely—these are my native air.”

Amen! I am breathing more freely all the time.
By Mark Fox