We do not have to live in fear 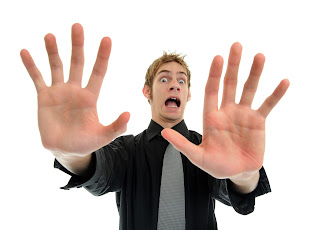 Hey, what are you afraid of? Forty-one percent say that their greatest fear is public speaking, which puts it at the top of the list. Number two is death, with eighteen percent choosing it as their greatest fear. Does that mean that most people would rather die than give a speech?

I read an article in the Times-News a number of years ago about phobias. The writer said that it is common to have fears, but it is not healthy to have phobias, which are unnatural, unhealthy fears. For a fear to be a phobia, “it must interfere with daily routine, occupation or social life.” Cynophobia is fear of dogs. Aviophobia is the fear of flying. Mysophobia is the fear of germs, and definitely widespread these days. It’s considered part of a larger malady, obsessive compulsive disorder. I had a student once who began a speech with a smile and this comment: “I bet most of you in here don’t know that there are 165 ceiling tiles in this room.” We all looked at the ceiling, right on cue. “I know there are,” she said, “because I count them every single day. I have obsessive compulsive disorder.” One of the newest fears is simply referred to as FOMO, or “fear of missing out.” It forces you to check your phone every 32 seconds for texts, emails, and social media updates.

I am not a psychologist, and there is plenty I do not understand about the fears that can cripple a person. But I am a follower of the One who commanded his disciples many times to “fear not.” I believe with all of my heart that if I fear God (meaning, reverence him), there is literally nothing else in the universe to be afraid of. Why should I fear the future if Jesus has promised that nothing will ever snatch me from his hand? Why should I fear a shortfall if God has promised to provide, whether it is through plenty or through want? Why should I fear rejection if God has promised me that in fact I will be rejected by men if I follow him? If suffering is part of his plan, and the Bible clearly teaches that it is, then why fear it? Why should I fear death if I know that death is not an end but a beginning, a portal to eternity?

I like that picture and believe we can apply it to our fears. It takes trust to let go of fear. Fear makes me hold on to the trapeze, but faith in the one who will catch me gives me the courage to let go.

When Jesus met his disciples on the day he was resurrected from the dead, his word to them was, “Do not be afraid. Go and tell my brothers to go to Galilee, and there they will see me.”

If Jesus can conquer death and the grave, he can certainly handle all of my fears. He can take yours as well.
By Mark Fox