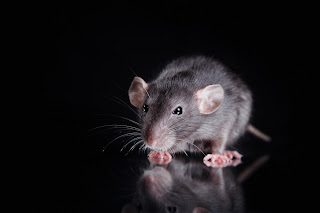 When I read this week about a dog café opening in California, it made me reflect on Americans’ love affair with animals. I thought about a couple of stories from the not-too-distant past that reminded me that sometimes, truth really is stranger than fiction. Case in point, a story several years ago out of Fort Sumner, New Mexico. The Associated Press reported that a homeowner there, Luciano Mares, caught a mouse inside his house and wanted to get rid of it. “I had some leaves burning outside, so I threw it in the fire, and the mouse was on fire and ran back in the house,” Mares said.

Village Fire Chief Juan Chavez said the burning mouse ran into the house and under a window. The flames spread up from there and throughout the house.

No one was hurt inside, but the home and everything in it was destroyed. The mouse didn’t make it, either.

“I’ve seen numerous house fires,” village Fire Department Capt. Jim Lyssy said, “but nothing as unique as this one.”

Lucky for Mr. Luciano that he doesn’t live in New Jersey. He could be facing a jail sentence to go along with his sudden loss of house and home. Ask Frank Balun. He was arrested in Hillside, N.J., for killing a rat. The rat had been eating Balun’s tomatoes, so he set a squirrel trap to catch the varmint. When he found the rat in the trap, he did the responsible thing. He called the Humane Society to come and pick it up. But when they arrived, the rat was dead.

“He was escaping,” explained Balun. “His head was sticking out. I called my friend and he said the rat would wiggle out the rest of the way if his head was poking out.”

“Danielle, my six-year-old granddaughter, was playing in the backyard,” Balun explains, “so I had to act fast. I got my broom, wrapped newspaper around the handle, looked the other way, and I hit him on the head.”

The limp hand of justice dangled a possible $1,000 fine and a six-month prison sentence over Balun’s head. Lee Bernstein, executive director of the Associated Humane Society, said, “You can kill a rat with a snap trap, or poison it, but you don’t kill a rat after you trap it humanely.”

Is it just me, or have the wheels come off the chariot? Are the inmates running the asylum? Has the country gone stark raving mad? One meme sums it up. A woman says into the phone, “No, I don’t want to come to your dog’s birthday party … freak.” Then she adds, “My cat is getting married next week.”

Even if you don’t buy the biblical argument for man’s dominion over every other created thing, would you be willing to agree that arresting a man for killing a rat in his own tomato patch is beyond the pale?

Apparently the judge did, too. When Balun vs. the State of New Jersey came to trial, justice prevailed. The judge said, as he dismissed the case, “In law, we must hold common sense high, above all,” his arm raised like the Statue of Liberty’s. Applause rang throughout the courthouse.

I love it when common sense makes an appearance.