My brother is home now 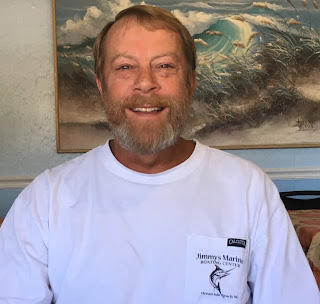 My older brother Keith went to bed last Monday night, in his home at the beach, and woke up sometime in the early hours of Tuesday morning in a different place. He went to sleep in a body, and he woke up absent from the body, present with the Lord.

Keith worked hard at RJ Reynolds for many years as one of their first computer guys, and was loyal to his employer for 38 years. But Keith’s heart was at the beach. He sent me a text last year after he had retired at the age of 59 and moved to Newport: “Brother Man (he always called me that), my only decision today, and every day, is whether I am going to fish from the surf, from the pier, or from my boat.”

We three boys fought like dogs as youngsters. No one wanted to babysit us. Some, bless their hearts, had no choice. BB gun fights. Spit wad fights. When spit wads got boring, we shoved straight pins through them and fired them at each other. Oh, we fought. But here’s the thing. If anyone outside the family bullied one of us, we became a band of brothers. A force to be reckoned with. I remember walking to school in the 4th grade (uphill, both ways; always snowing, as I remember) and being picked on and knocked over by a kid named Chuck. He tormented me…until Keith heard about it. Keith took care of Chuck. Because he wanted to take care of me. That was what my older brother did. He took care of people. At his church in Winston-Salem, and in his neighborhood, and in his community at the beach. In the ten years between my father’s death and Keith’s, you could count on one hand the days that he didn’t either go see our Mom or call her. What I kept hearing at his memorial service were stories of how he had helped someone in need, how he had loved people so well.

The Psalmist said, “Precious in the sight of the Lord is the death of His saints.” It is a wonderful thing to think about, that when a loved one dies who knows the Lord, their death is a precious thing to God. The word for “precious” almost always refers to precious stones and jewels that adorned the temple. The Bible uses it to refer to God’s Word, as well. And His wisdom. Precious things are valuable and rare and something to be treasured. That’s what God thinks of the death of one of His own. It’s precious to the Lord when one of His sons and daughters die, because of the priceless and imperishable sacrifice of HIS Son, the Lord Jesus Christ.

Charles Spurgeon wrote this: “They shall not die prematurely; they shall be immortal till their work is done; and when their time shall come to die, then their deaths shall be precious. The Lord watches over their dying beds, smooths their pillows, sustains their hearts, and receives their souls. Those who are redeemed with the precious Blood are so dear to God that even their deaths are precious to Him.” We will walk right from this life into the next, into the open arms of our Savior.

My brother is home now. He is truly in his element. He is more alive than he has ever been. And all who are in Christ by grace and through faith will see him again. I can’t wait.

You know, there’s a glassy sea in heaven. Wonder if there are any fish in it?
By Mark Fox