Take A Step Toward Biblical Literacy 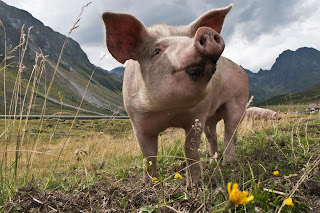 Several years ago, former “Saturday Night Live” star Julia Sweeney explained in an interview for the San Francisco Chronicle why she became an atheist at 38: “You know, like Jesus was angry a lot. When he turned all those people into pigs and made them run off a mountain, it was so hateful, not just to people, but to pigs. I felt so upset for the pigs!”

A reader responded, tongue firmly planted in cheek, “Reminds me of the time Jesus turned 5,000 people into fish and bread and ate them.”

A fundamental question we must ask as believers and followers of Jesus Christ is this: does each passage in the Bible have more than one interpretation? In other words, did the author mean more than one thing when he wrote the passage? Certainly there may be many applications to a passage, but can there be more than one meaning?

If each passage has a particular meaning that was intended for that audience, how do we find out what that meaning was? Hermeneutics, the science of interpretation, applies here. It involves looking at the author, his audience, the context, the word meanings, the culture, the reason for the letter or book, the situation that was being addressed, and much more. If we do not attempt to understand any of that, then at best we will misinterpret the Scriptures and be led astray. At worst, we will lead others astray.

Just consider context for a moment. It has everything to do with how we interpret something we read. If I read about a massacre on the front page of the newspaper, the context itself will tell me how to interpret that word. If I read about a massacre on the sports page, the context there will suggest something entirely different. If I read the sports headline, “Cowboys slaughter Redskins!” for example, I don’t need to fear that our relations with Native Americans has taken a turn for the worse.

One of the verses most often taken out of context is Philippians 4:13, “I can do all things through Him who strengthens me.” How do we interpret this verse and apply it to our lives? If we just blindly apply it, then we may decide to go helplessly into debt buying Powerball tickets, or we may believe it’s time to leave our spouse, or quit our job, or drop out of college, all the while claiming that God helps us do ALL things. Doing most of those things would be foolish and unbiblical, and none of them could be supported by this verse in question. Philippians 4:13 lives in a contentment context. In other words, Paul writes that he has learned to live in God’s strength when the cupboards are overflowing, and when they are bare.

And just for the record, Jesus did not turn people into pigs. Nor did he turn people into fish and bread. What he did was deliver the possessed and feed the hungry and teach us that only in Him can we find life everlasting. The true stories can be found in Luke 8 and John 6.

Check it out for yourself. Take a step today towards biblical literacy.