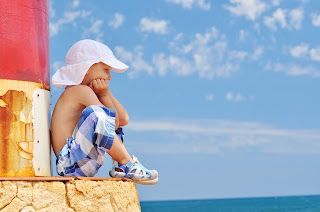 I was probably 6 years old, and it was the day before my family was going to the beach for summer vacation. We went to Surfside Beach for a week every year, and my grandparents were almost always there, and sometimes cousins and friends as well. It was the highlight of my year and I looked forward to every minute that we could run on the sand, play in the surf, watch the ships come in at Murrell’s Inlet, and eat fresh seafood in one of the many restaurants there.

I remember this particular trip because it was the most miserable. All of the pictures that I appeared in feature a little boy covered in pink lotion from head to foot. Looking miserable. Making everybody else around him miserable.

You see, the day before we were to leave for the beach, I went outside to play. There was a pasture behind our house, surrounded by barbed wire. I would often crawl under or over the fence and run in the pasture, which was fine with Mom. This particular day, however, she didn’t want me in the pasture.

“Mark, stay out of there!” she called from the carport.

I made a face and scampered under the fence.

“Mark, you had better stay away from the poison ivy!” Mom yelled, not having the energy to even deal with my first disobedient act.

Now, you need to understand that when I was a boy, I could walk into a yard that was adjoined by a garden that was adjacent to a pond that was beside a patch of woods that had poison ivy in it — and the next day I would swell up like a puffer fish. That’s how badly I was allergic to the nasty little plant.

“You mean this poison ivy?” I responded with glee, having pulled up handfuls of it as soon as she mentioned the weed. She looked on, aghast, as I proceeded to rub the noxious leaves over my face, neck, arms, and legs, as though I were bathing in the most luxurious spa in Paris. I crowed with delight when I saw the look on my mother’s face. I beamed with pride at my little act of defiance. I showed her who’s boss, I thought.

This happened in the early 60s, and back then the only “cure” for poison ivy that we knew about was calamine lotion. And that was no cure at all. It eased the misery a smidgen, but the sticky pink mess that was my body was the butt of every joke my two brothers could come up with. I couldn’t enjoy being outside on the beach because the sun inflamed the fiery red ridges. I had to sit and watch as my brothers fished the surf with Dad. Even fried shrimp and french fries didn’t taste the same. As we sat down to eat at Lee’s Inlet Kitchen, people stared at this kid who was swollen and pink, marveling at how much damage poison ivy could do to one little body. My bumps had bumps and my blisters oozed and ran, and my mind kept replaying that scene: “You mean this poison ivy?”

I am amazed that God would choose to love and redeem such a rebellious boy as I. But the miracle of God’s plan is not about how bad we are but it is about how great and forgiving he is, because “where sin increased, grace abounded all the more.”

Sadly, sometimes I still act like that selfish little boy. God keeps giving me grace and teaching me to obey.