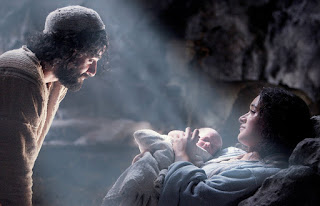 Luke wrote, “And she gave birth to her firstborn son and wrapped him in swaddling cloths and laid him in a manger...” There’s no mention of how much Jesus weighed, and how long he was, you know, the data we always ask for when a baby is born. There was no mention of whether he had his mother’s eyes. And maybe you have wondered like I have if God made Jesus to look like Joseph, even though he had none of Joseph’s genes in him at all. We won’t know until we get to heaven, but I think God did that. Maybe Jesus had Joseph’s chin. We don’t know and it doesn’t matter. There was a ridiculous article last week in the news about how scientists think they have figured out what Jesus looked like. Look, I know Jesus wasn’t lily white with blond hair and blue eyes. He was a Jew, born and raised in Israel. But scientists and others can guess all they like about what Jesus looked like, but the Bible gives us not one clue. In fact the Bible tells us nothing about his appearance, except what Isaiah wrote: “He had no form or majesty that we should look at him, and no beauty that we should desire him.”

So, if you were going to cast someone in a movie to play Jesus, would you go for Gimli or Aragorn? John Rys-Davies or Viggo Mortensen? You’d have to go with Gimli, if you consider Isaiah’s prophecy.

Jesus’ looks notwithstanding, it is an amazing story, the appearance of God in human form. The account in the Gospel of Luke is one of the many examples in the biblical narrative that has a ring of truth and encourages us to believe it. Face it, if you were going to write a fictional account of the birth of the Savior of the world, who would his parents be? And where would he be born? You wouldn’t pick Joseph and Mary, a betrothed couple from Nazareth, he a carpenter and she a peasant girl. You wouldn’t decide to have animals as attendants, and a manger as the bassinet. You just wouldn’t. The one born to be King of kings and Lord of lords would have royal parents, or at least powerful and important ones, and he would be born in the finest house in the land, and be laid on a pillow made of silk, and have dozens of attendants to wait on him and make sure he needed nothing and wouldn’t even have reason to cry. A carpenter and his fiancée? A manger? No way. But friends, please don’t miss the point. Luke didn’t write it this way to make it sound true. He wrote it this way because it IS true.

I like the way Steven Curtis Chapman wrote about Jesus in his song, “This Baby:”

Joy to the world! The Lord is come.
By Mark Fox