Do the first things first 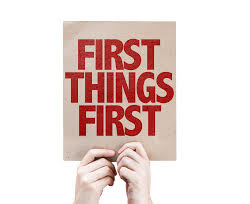 His job was not to set the table and to make sure that everyone had a cup. No, the cupbearer to the king was a drink-bodyguard. That’s what Nehemiah did. His job was to choose and to taste the wine to make sure it wasn’t poisoned before bringing it to the king. It was a risky job, but one which allowed him to live in relative comfort and have a measure of influence over the king he served.

When the story opened, Nehemiah was 1,000 miles from Jerusalem, and he was serving a foreign king in what is now Iran. He got word that the people who were left behind during the conquest were living in the rubble of a city whose walls were broken down. This is where we really start to get to know the man, Nehemiah, and what he was made of. When Nehemiah heard about the suffering of his people, he sat down and wept and prayed, so moved was his heart for the suffering of the people of God.

When I read this in preparation to start a new series in the book of Nehemiah, I was reminded of our men’s retreat a few weeks ago. We were gathered on Saturday morning, praying corporately through Psalm 34, when we got to verse 17: “When the righteous cry for help, the Lord hears and delivers them out of all their troubles.” Scott began to pray for our brothers and sisters all over the world who are being persecuted for their faith, in a manner that I think mirrored Nehemiah’s passion for his brothers and sisters many miles away. The room was silent as 40 men and young men entered into his prayers and his tears. Scott cried out to God for the men and children who are being tortured and beheaded because they will not bow the knee to Islam and will not renounce faith in Jesus Christ. He prayed and cried for the women and girls who are being subjugated and treated as sexual slaves for the same reason. There was no pretense to his prayer, no attempt to “sound good” or to teach something. Scott was simply broken over the suffering of others. It was a powerful, holy moment for all of us.

Back in Persia, then, we find Nehemiah weeping and praying. You could argue that he was the most trusted man in the kingdom, as he was willing daily to lay down his life for the king. He could have rushed to the king with the news and immediately asked for a plan of action to be put in place. But instead, the very first thing he did was to go over the king’s head to the highest authority of all.

Don’t get me wrong, dear reader. Nehemiah was a man of decisive action, as you will see if you read the book. But we betray our misunderstanding about prayer when we say things like, “Let’s pray and then we will get started.” As if prayer is an optional extra, as if it doesn’t really matter, as if we are not “doing” anything when we pray. A.J. Gordon said that you can always do more than pray after you have prayed, but you can never do more than pray until you have prayed. And EM Bounds said, “What the church needs today is not more or better machinery, not new organizations, or more novel methods; but men (and women) whom the Holy Spirit can use — men of prayer, men mighty in prayer.”

Start with prayer. Do first things first.
By Mark Fox