Racial prejudice can be overcome 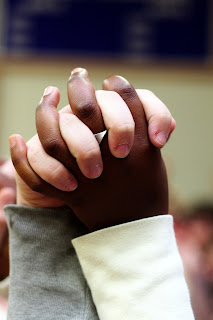 We traveled in a 7-passenger van from Florida to Connecticut and as far west as Upland, Indiana where we performed at Taylor University, and to an Air Force base in Michigan. I remember setting up our instruments and singing in the inner city of Bridgeport, Connecticut. It was a hot day and the people were outside, trying to find a cool spot to pass the time away with friends. I remember a concert in a maximum-security prison in Maryland. The Chaplain’s name escapes me but I can still see his face and hear the compassion in his voice for the men there. I remember a concert in Blanche prison, just up the road in Milton, NC. The chaplain told us before we went in that each of these men between the ages of 18 and 21 was sent to Blanch either for his own protection or for the protection of others. We walked each cellblock, singing songs and sharing a brief message of hope. I remember many concerts in churches and nursing homes and schools. It was during this two-year period that God did some very important things in my heart and in my family.

Cindy and I were part of a ministry team in the early 1980’s called “Damascus Road,” which was under the umbrella of New Directions International. The other team members were Joel and Sonia, a couple who had been a part of the New Directions for many years before we showed up on the scene. Joel was the leader of Damascus Road, and he and Sonia were the primary musicians and singers. Cindy and I sang back up and worked hard at trying not to mess up the songs.

My job was to help line up the bookings for the group, to help Joel with the equipment at each concert, and to give the message. It was during these two years that I cut my teeth in preaching, and learned many lessons the hard way. I remember Joel sitting me down after a trip to Columbus, Georgia. He told me what the pastor of the church there had said about my preaching: “You’re not good at it.” I was crushed, but thankful that my friend Joel would speak the truth in love. During a period of soul-searching and prayer, God reconfirmed his call to me to preach, but he also showed me how I had depended more on my ‘abilities’ than on his.

I also came face to face with my own prejudice during those years, and God did a marvelous thing. As we traveled and sang and prayed and ate and lodged with Joel and Sonia, who are black, we saw how much we were alike. We also came to understand and appreciate our cultural differences and to love each other through them all.

Cindy and I started having children when we were still traveling with Damascus Road, and Joel and Sonia were our first teachers in the area of child-rearing. We learned as much about loving and disciplining our children from them as we did from the books that we read at that time.

The prophet Amos asked, “Can two walk together unless they are agreed?” I look back to those days when we walked together with Joel and Sonia with great fondness, and thank God for using them to change our hearts. Perhaps the best way to overcome racial prejudice is to work together on the same team.

Tom Skinner used to say that racism is a sin problem, not a skin problem. That’s why only Christ can heal the divide.