We cannot remain silent about this 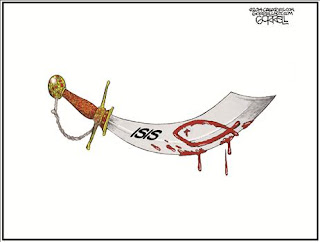 When I was a teenager in Winston-Salem, someone laced chunks of meat with poison and threw them to some of my neighbors’ dogs. The dogs died and the owners cried and the rest of us were shocked. Who would commit such a senseless act? What had those dogs done to deserve death? That was 40 years ago, and I hadn’t thought about that incident since then.


Until last week, when I heard an interview of Johnnie Moore, who wrote a book I will tell you about in a moment. But first, he was talking about meeting a nun in Iraq recently who is taking care of thousands of Christian refugees, people who have had to flee their homes and their businesses because of the Islamic State (ISIS). She said to Moore, “I lived in America. You are wonderful people. I have an education from an American college; I love America. But I don’t understand why you won’t help your Christian brothers and sisters. You take such good care of your pets. Why won’t you take care of us?”


That’s when I remembered the poisoned dogs. It was a horrible act of cruelty, and the owners were angry and then saddened by their loss. But life moved on and we all forgot about it. The nun is right. For the most part, Americans are really good about taking care of their pets. And mistreating an animal can land you in prison; just ask Michael Vick.


So, why is it that as a nation we are not shocked and outraged by what is happening Iraq and Syria, not to pit bulls but to human beings? In February, ISIS militants released a video titled “A Message Signed with Blood to the Nation of the Cross.” It showed the executions of 21 members of the Coptic Orthodox Church on a beach in Egypt, and many of the victims cried out to Jesus before they were beheaded. Their blood flowed into the Mediterranean Sea, and their severed heads were discarded. Last year we learned that jihadists were identifying Iraqi homes where Christians live, and marking them with the Arabic letter for “N.” That let the ISIS soldiers know that Christians (or Nazarenes, as in “Jesus the Nazarene”) lived there. The Christians were forced to flee, leaving behind their homes. If they stayed, they were forced to renounce Christ and convert to Islam, or be beheaded.


The latest estimate is that more than 14 million people have been displaced by the Islamic State. Tens of thousands have been killed. Thousands of Christian artifacts have been destroyed. Last July, NBC reported that the last remaining Christian was forced out of Mosul, a city in Iraq that has boasted a Christian community for nearly 2,000 years.


This why Johnnie Moore wrote the book, “Defying ISIS.” He wants to let people like you and me know about the atrocities that are being committed against our brothers and sisters in Christ. He believes the words of Martin Luther King Jr. were prophetic not just for his day but for ours as well, when he said, “In the end, we will remember not the words of our enemies, but the silence of our friends.” Today in the war on Christians, the silence of friends speaks volumes.


The Bible says we are to “Remember those who are in prison (for the sake of their faith), as though in prison with them, and those who are mistreated, since you also are in the body.”


We cannot remain silent. We must speak for those who have no voice.
By Mark Fox