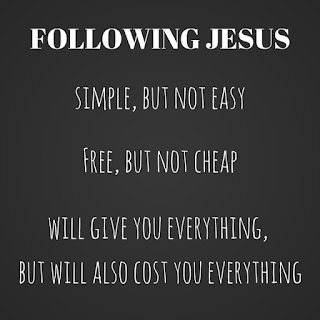 Following Jesus is not complicated. In his final instructions to Titus, Paul wrote, “When I send Artemas or Tychicus to you, do your best to come to me at Nicopolis, for I have decided to spend the winter there.”

The first simple truth we see in this is that leadership is important. Titus had been left in Crete to put things in order, to identify and train elders, and to deal with false teachers who were doing harm to the churches on the island. Now Paul is asking him to do his best to come to Nicopolis, but only after his replacement has arrived. The churches would not be left without a leader.

The second simple truth we see in this text is that Paul had decided to spend the winter in Nicopolis. You say, yes, that’s ordinary. But why is it important? Well, because some well-meaning Christians then may have said to Paul, “You decided, Paul? Didn’t you pray about it?” Paul may have replied that of course he prayed, but the Lord had given him much grace and freedom in these matters. Dear reader, let’s all be careful not to be more spiritual than the Apostle Paul. I remember back in the ’70s during the Jesus movement hearing a lady in our church say that a friend of hers wouldn’t get out of bed in the morning until the Lord had told her exactly what she was supposed to wear that day. At the time, I was impressed; now, it just sounds like someone who doesn’t want to get out of bed. But no, this lady really believed Jesus had to tell her everything she was supposed to do, down to what pair of socks she should wear. She would also pray before she picked up the bowling ball when it was her turn at the lanes. Nobody wanted to bowl with her.

Read the prologue to the book of Luke and you will see that he wrote it because it seemed like a good thing to do. This is an amazing idea. It means, a thought occurs to you, you think about it and say to yourself that it seems good, and then you go do it. A lot of Christians are fearful of that because they think they will just go crazy and live any way they want. But I think the greater problem for the average follower of Jesus Christ is not that he takes initiative too often. It is that he takes initiative rarely or not at all. It’s really a lack of trust, because we have a loving Father who gives us more grace than we could ever possibly use. If God’s grace were the Pacific Ocean, mostly we are paddling around in a round plastic kiddie pool.

Paul wrote that it is God who “works in you both to will and to work for His good pleasure.” That means He does all the heavy lifting by putting His desires in us to do what will bring Him good pleasure. Paul had a desire to go to Nicopolis, and I believe he knew that desire had come from the Lord. It was a pleasant place to spend the winter, by the Adriatic Sea. By the way, this is yet another reason why it is biblical to go to the beach. Paul also wanted Titus to come hang out with him in Nicopolis as well, so they could have fellowship, and Titus could give him a report about the churches in Crete.