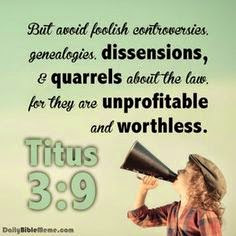 Do angels have wings? And speaking of angels, how many of them could dance on the head of a pin? Did Adam and Eve have a pet? Will there be baseball in heaven? You’ve heard the story of the two men who argued about that, and then one died. A week later, he visited his friend in a dream. He said, “I have good news and bad news. The good news is there’s baseball in heaven. The bad news is you’re pitching Friday.”

We can have light-hearted conversations about some of these questions, for sure. But should we get into arguments over them? Or write books about them? Or spend our lives to defend them? No, the Bible is clear when it says, “Avoid foolish controversies.” The operative word there is foolish. Certainly, Christians are called to “contend for the faith once for all delivered to the saints.” But much of what Christians argue about is foolish, has no merit and is based purely on speculation. There is no clear biblical teaching on foolish controversies, but many insist on studying them, writing about them and worst of all, dividing over them. That’s why they are dangerous.

A foolish controversy that I haven’t heard lately but was popular years ago is the argument that Jesus’ garment at the cross, for which the soldiers cast lots, was very expensive. We have absolutely no evidence to suggest that, but this contention has been used as a proof text to suggest that Jesus was prosperous and we should be as well. Another foolish controversy, one very much present today, is that Jesus was really crucified on Wednesday and rose from the dead on Saturday. Therefore, the argument goes, we should gather for worship on that day, not on Sunday. Again, there is no biblical support for that argument. It creates heat, but provides no light.

Charles Spurgeon said this on the matter of foolish controversies: “It is foolish to sow in so barren a field. Questions upon points wherein Scripture is silent, upon mysteries which belong to God alone, upon prophecies of doubtful interpretation and upon mere modes of observing human ceremonials, are all foolish and wise men avoid them. Our business is neither to ask nor answer foolish questions, but to avoid them altogether; and if we observe the apostle’s precept to be careful to maintain good works, we shall find ourselves far too much occupied with profitable business to take much interest in unworthy, contentious and needless strivings.”

The sad truth is that when we embrace foolish controversies, which cannot be proved through Scripture, we don’t just become dangerous to ourselves spiritually. We may also become divisive in the body of Christ.

One way to avoid foolish controversies, as Spurgeon suggests, is to become intentional about pursuing good works. We should find no controversy there.
By Mark Fox