He came to make those who were His enemies His heirs 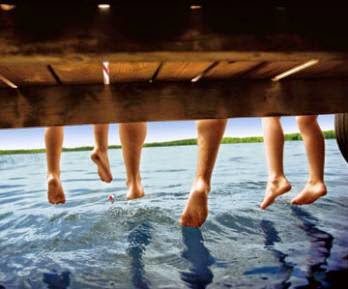 A family was vacationing at the lake. Dad was puttering around in the boathouse. Two of his sons, a 12-year old and a 3-year old were playing along the dock. The older brother was supposed to be watching little Billy, but he got distracted, as older brothers sometimes do. Billy took that opportunity to go check out the shiny aluminum fishing boat tied up at the end of the dock. He put one foot on the boat, lost his balance and fell into the water, which was about 6-feet deep. The splash alerted the older brother, who let out a piercing scream. Dad came running from the boathouse, jumped into the water, swam down, but unable to see anything, came up for air. Sick with panic, he went back down into the murky water and began to feel everywhere around the bottom. He couldn’t feel anything. Finally, on his way up, he brushed against Billy’s arms that were locked in a death grip on one of the posts of the dock, about four feet under water. He pried the boy’s fingers loose, and they burst thru the surface to fill their lungs with air. Finally when the adrenaline had stopped surging, and nerves had calmed down a little bit, the father asked his 3-year-old son, “What on earth were you doing down there hanging onto the post so far under the water? Billy said, “I was just waiting for you dad. Just waiting for you.”

That’s what God did for us. Except we weren’t holding onto a post, still alive but quickly fading. No, we were dead. Dead in our trespasses and sins. Having no hope and without God in the world. Slaves to various passions and pleasures, passing our days in malice and envy. But God, being rich in mercy, because of the great love with which He loved us, even when we were dead in our trespasses, made us alive together with Christ. It couldn’t get any better than that, could it? To be enslaved to sin and find freedom? To be dead and then be made alive? And to be made alive together with Christ? That’s the pinnacle, isn’t it?

No. There’s much more. God did not just come to make bad people good. That would not be enough. Neither did He come to make dead people live. That is amazing all by itself, but it is still does not express the heart of God’s mercy. He came to make those who were His enemies ... His heirs. We are heirs of God and co-heirs with Christ. He adopted us into His family.

I am told that the law on the books in Georgia is that a father can change his will to cut out his natural born children from any inheritance. But he cannot, by law, cut out any of his adopted children.

That’s a picture of the Gospel. We are all naturally born sinners, and as such we stand to lose everything, including our lives. But those who come to Christ by grace and through faith are adopted into His family and can never lose their inheritance, any more than Jesus could lose His. There will never be a moment in time or eternity that the Father will turn to the Son, Jesus Christ, and say, “I have changed my mind. You are no longer my son.” The thought is unimaginable. Unspeakable.

Neither will God ever turn away one of us who know Him because of the sacrifice of His Son on the cross. Blessed are you if you really know that.
By Mark Fox