The placement of faith makes all the difference 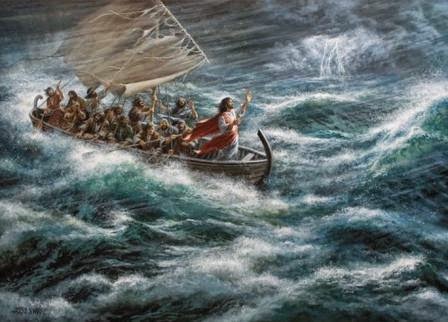 My kids and my wife used to be able to write something like this in their journal before we went on a trip together: Day One: “Dad got frustrated today in traffic and yelled, ‘What in the world are you doing, dude?’ to the guy in front of us.” Day Two: “Dad had words with the waiter because he didn’t get there fast enough with more water.” Day Three: “Back in traffic and Dad is wondering about the IQ of the man riding his bumper.”


I realized something important as I read in Luke’s gospel recently about the time when Jesus and His disciples were caught in a storm on the Sea of Galilee. As the storm raged, Jesus slept. This is what I learned, again: God orchestrates the storms of our lives. He plans every one of them. When the four-man team from our church had a 12-hour layover in London several years ago, while on our way to Kenya, we had a blast, got along great and enjoyed every minute of it. I remember witnessing to some people I sat next to on the train from the airport. I was in a great mood, the sun was shining, we were touring a world-famous city, and life was good! Then it happened. We were about to go find the train that would take us back to the airport to catch our flight, when the bottom dropped out. The mother of all thunderstorms hit and knocked out the power. We were stuck, stranded for a time, and by the time we got back to the airport, the plane had taken off without us. Guess what I don’t remember about the ride on the train back to the airport, wondering the whole way if we would miss our flight? I don’t remember witnessing to a soul. I wasn’t telling anybody about Jesus. I am ashamed to admit that I was too busy fretting and grumbling. He orchestrated the storms, but all I could see was myself.


It was the same with the disciples, wasn’t it? Jesus was asleep in the storm. The disciples panicked, though they were no slouches when it came to handling a boat in tempestuous waters. They cried out to Jesus, who awoke, rebuked the wind and the waves, and the storm instantly ceased. His question for the disciples was a question for the ages: “Where is your faith?” Remember this truth: your faith is only as valid as the object or person in which it is placed.


If our faith is in the modern gurus (Oprah, Tolle, Chopra …), then I would humbly suggest that we have no hope of weathering the storms of life successfully. We will eventually run into a storm for which our ability and their ‘counsel’ are simply not sufficient, especially when we face the inevitable storm of death. You can trust the Lord, and him alone, to take you to the other side. No one else can. No one else will.


Jesus never promised to deliver us from the storms. He promises to deliver us through them. With that in mind, I can sleep through whatever He sends my way. I can even relax when someone’s riding my bumper.