WHAT'S SO WRONG WITH THE PHRASE, "HAPPY HOLIDAYS"?

It happens every year. Before the leaves can change from green to orange–and before those leaves descend to the ground–businesses start promoting their Christmas ads. Or as many businesses call them, their “holiday” ads. And this undoubtedly Hulk-rages every Christian on the planet into a wreath-colored green.

“How dare they remove ‘Christ’ from ‘Christmas!'” we cry. Just like the Hulk, we promise these business that they won’t like us when we’re angry. 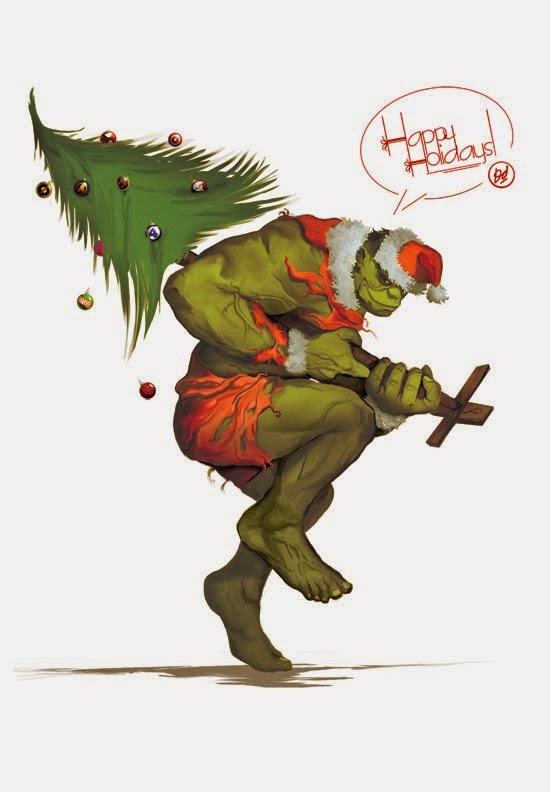 Really. What’s so wrong with the word “holiday”? Is the word so bad that it warrants sign picketing in front of the local Home Depot? Does someone really need to start the 732nd online petition forbidding the term? Do our embittered protests really affect anything?

Is the word “holiday” so malevolent that we ought to make the banning of it our hill upon which to die? Is there not a better way to spend our Christmas time and energy? And, more importantly, is this really the best way to combat the underlying problem?

The word “holiday” comes from the Old English haligdæg, which means, “holy (halig) day (dæg).” It was used to describe things like religious festivals, meaning that businesses using the word “holiday” to describe religious events like Christmas isn’t necessarily anything new. The word has been used this way for a long time. So, contrary to popular conservative Christian opinion, the 2005 Boston “holiday tree” scandal, in which the word "holiday" was used to describe a Christmas tree, wasn’t anything new.

(Not to mention that “Christmas trees” are more than likely the residual result of pagan worship.)

The reality is that the word “holy-day” isn’t that bad of a word to describe a day slated to represent the birth of God’s Son. I would argue that it’s not just not a bad word (double negative, anyone?), but that it’s a fantastic word. I mean, if the day that we celebrate the earthly incarnation of the heavenly Creator’s Son is not a “holy day,” then I don’t know what is.

This is what the word “holy” entails. It can’t be ascribed to anything or anyone else better than the God of the Bible. The word literally means, “to be whole or intact” and “that which cannot be transgressed or violated.” God alone is completely intact, and so he is himself holy and emanates holy-ness, which thus warrants Christmas--the worship of his holiness coming to earth--as a “holy-day.”

The point is that it’s not that bad for a business to forego using the word “Christmas” in lieu of the word “holiday.” This is because, in so doing, they are still employing a powerful word to describe an even more powerful event. Even if they don’t realize it. It just speaks to the deep-rooted reality of the birth of Christ.

Even Santa’s elves can’t tinker with it.

I know what you’re thinking, though: “It’s not the word ‘holiday’ so much as it’s intentionally not using the word ‘Christmas.'”

It’s because they don’t know the Christ of Christmas.

This, friends, is the true crime of the Christmas season.

If anyone is attempting to remove the Christ from Christmas, it’s us. When we force unbelievers to act like a Christian without telling them about Christ, we do more damage than any secular business could ever do by using the word “holiday.”

So, this year, instead of picketing your local hardware store, or signing an online petition, or posting that enfevered Facebook post, let’s deal with the root of the problem, not its symptoms.

The truth is, you can’t take Christ out of Christmas, regardless of what word you choose to use to describe it. He’ll always be the reason for the season. Our job is to get unbelievers to see Christ, not say “Christmas.”