Mild He lays His glory by 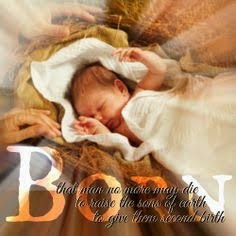 I heard Frank Turek say at Elon a few years ago that the greatest miracle ever performed was creation, because God made something out of nothing. Others say the greatest miracle of all time was the resurrection of Jesus Christ. Still, others cast their vote for the incarnation. Wayne Grudem wrote, “It is by far the most amazing miracle of the entire Bible. The fact that the infinite, omnipotent, eternal Son of God could become a man and join Himself to a human nature forever so that infinite God became one person with finite man, will remain for eternity the most profound miracle and the most profound mystery in all the universe.” We can disagree about which of the three events in history is the greatest miracle, but the incarnation is amazing and glorious, and worthy of our study and attention. May I say also that I take issue with those Christians who refuse to acknowledge Christmas because of all the arguments they muster:

Dec. 25 is not the actual day Jesus was born, there are pagan celebrations connected with Christmas, it’s gotten too commercial or any number of other reasons. We understand those arguments, but we also understand that the incarnation is a fact, a real event, and we celebrate that! It is the birth of the Messiah, the coming of our Savior that we celebrate on Christmas.

Philippians 2:6-11 is considered by many to be the greatest doctrinal statement in the Bible relative to the person of Christ. It is called the “kenosis” passage because of the word used in verse 7: He “emptied Himself.” I wish we could really grasp with our understanding how high He was and how low He came. But there’s no way we can. It’s like asking your dog to understand Shakespeare, when you’re still working on trying to make him understand “no.” Or, “be quiet.” But there is much we can know, even with our limited, finite minds, and the plain truth in the Bible is that Jesus, who always was and is coequal with God, took on human flesh in order to die for us on the cross.

It is precisely because the incarnation is essential to our faith that it has been in the crosshairs of heresy from the third century. Arius proposed in 320 A.D. that only God the Father was eternal and that He produced Jesus Christ out of nothing as His “first great creation.” This heresy was refuted by the Council of Nicaea that produced the Nicene Creed, and which states in part, We believe in one Lord, Jesus Christ, the only Son of God, eternally begotten of the Father, God from God, Light from Light, true God from true God, begotten, not made, of one Being with the Father. Through him all things were made.

Sadly, the heresy of Arianism lives on today with people who practice the Unitarian, Mormon and Jehovah’s Witness religions, among others who deny that Jesus was and is coeternal with God.

Why is this important? Because the incarnation of Christ is essential to our salvation. And because the understanding of what Jesus did by leaving glory and becoming a man is essential to our own humility. Jesus was equal with God. But He “did not count equality with God a thing to be grasped.” He laid aside the independent exercise of His divine attributes and was born in a manger.

“Mild He lays His glory by, born that man no more may die, born to raise the sons of earth, born to give them second birth.”

That’s why we celebrate.
By Mark Fox