It is time to wake up 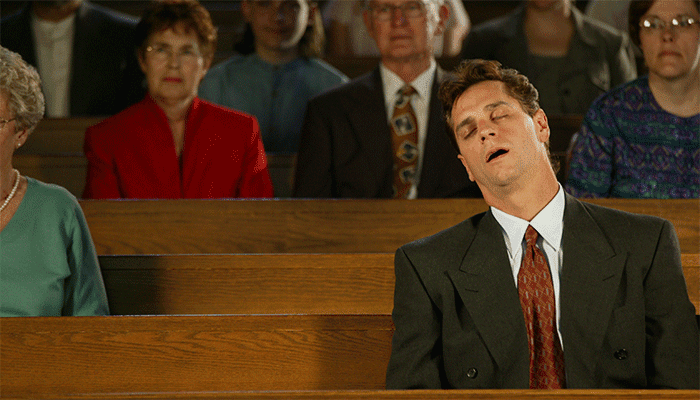 If you have developed a habit of using church as a nursery, then you might want to consider this. A man who went to church with his wife always fell asleep during the sermon. His wife decided to do something about it and one Sunday she took a long hatpin with her to poke him with it every time he dozed off. As the preacher got to a part in the sermon where he asked, “And who created the universe in six days and rested on the seventh?” she poked her sleeping husband, who came flying out of the pew and screamed “Good God, almighty!”

Then there’s the story of a man who fell into a deep sleep every Sunday, so the pastor devised a plan. During one service the pastor asked his congregation while the man was sleeping, “All who want to go to heaven, please rise.” Everyone stood up except the sleeper. Then, at the top of his voice, he bellowed, “All who wish to go to hell, stand up now!” The sleeper bolted out of his pew, looked around and said, “I don’t know what we’re voting on, preacher, but it looks like you and me are the only ones for it.”

I don’t know why Luke included a story in the book of Acts about a young man named Eutychus who fell asleep in church, but I’m glad he did. It encourages me that this problem even happened when Paul was preaching. The story gets worse when the young man falls from a third floor window and dies.

You have to be careful when and where you fall asleep. I remember a kid in high school chemistry who fell asleep, didn’t even hear the bell go off for classes to change, and was still asleep when the next group of students came in and found him with a paper airplane sticking out of one ear, courtesy of a classmate. I remember one time when Cindy and I were dating and stayed up all night talking, even though I had to be at IBM at 4:45 a.m. for work. I fell asleep on N.C. 54 and when I woke up, I was in the left lane, passing a car. God was merciful.

Think about some things that happened in the Bible, good or bad, while people slept:

Adam fell asleep and woke up married. And missing a rib.

Samson fell asleep and woke up in chains. And missing his hair.

Daniel fell asleep and woke up having a vision. And looking at the angel Gabriel.

Jonah fell asleep and woke up in a fish.

The story in Acts 20 has a happy ending, as Paul takes the boy in his arms and the Lord raises the young man from the dead.

Clearly this passage in the Bible is not there to warn us about sleeping in church. But if the pew fits, sit up in it and pay attention. The Bible does warn believers, however, to make sure that we do not sleep when we should be awake. Paul wrote, “Besides this you know the time, that the hour has come for you to wake from sleep. For salvation is nearer to us now than when we first believed.” How do we stay awake, spiritually? “Put on the Lord Jesus Christ, and make no provision for the flesh, to gratify its desires.”

One question, then. Are you awake?
By Mark Fox