It was crazy good in Ephesus 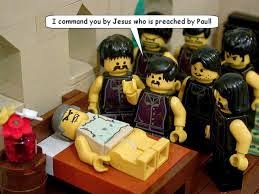 There were some crazy things going on in Ephesus in the first century, as recorded in Acts 19. I would call it at first blush a bad “Jerry Springer Show” episode, assuming there’s ever been a good one. But you’ve got healing hankies being handed out, wanna-be exorcists beaten up by a demon-possessed man and running out of the house naked, and people bringing the ancient equivalent of Ouija boards, crystals and Tarot cards and throwing them on a bonfire in the middle of town. The craziest thing of all? This was all a powerful act of God. Every bit of it. The healing hankies were not a televangelist’s ploy to raise money so he wouldn’t have to be called home to heaven, or worse, lose his TV show. No, they existed because the palpable presence of the Spirit of God on the Apostle Paul was so powerful that even things he touched, like handkerchiefs and aprons, were able to heal the sick and cast out demons. And you know it was a miracle because Paul had nothing to do with it. It wasn’t Paul who was passing out the hankies, or even worse, selling the hankies for a donation to his ministry. The would-be exorcists? They were pummeled by the demon because God doesn’t shrug at those who speak for Him when they don’t even know Him. He acts in such cases, and sometimes severely. The bonfire? When the fear of God falls on people, repentance leads to reformation. Bondages are broken and lives are changed. So, yes, these were crazy days in Ephesus. Good crazy.

You can read about the other events, but let me tell you more about the would-be demon slayers. They were called “itinerant Jewish exorcists” by the author of Acts. Seriously? Traveling exorcists? Did their website read, “Have demon, will travel”? Was their phone number 1-800-COME-OUT? It’s hard to take these guys seriously, but this is no laughing matter to God, as you will see. Their biggest mistake was that they “undertook to invoke the name of the Lord Jesus.” You get that? They tried to transact business in Jesus’ name when they didn’t know him at all. That would be like me going into any bank this Monday, and saying to the manager, “I am here for Warren Buffet; give me $500K.” I would undertake to invoke the name of Warren Buffet, and they would undertake me right out of there. Simon Kistemaker said, “The term ‘name’ signifies the person, words, and works of Jesus, so that anyone who uses this name identifies completely with its bearer and becomes a true representative.” These seven men were clearly not representatives of the Lord Jesus. When they tried to cast out the demon, it said, “Jesus I know, and Paul I know; but who are you?” Then the demon-possessed man proceeded to beat the wanna-be exorcists up so badly that the seven men ran from the house wounded and naked, and were perhaps renamed after that, “The seven streakers.”

There were three huge mistakes these men made from which we can take warning. First, they had only second-hand knowledge of Jesus. There’s a huge life-changing difference between knowing about Jesus and really knowing Him. Second, Jesus was just an “add-on” to their belief system. You can add a rabbit’s foot, too, but don’t hold your breath for good luck. Third, they used Jesus’ name as a means to an end. They weren’t interested in surrendering to Jesus, only using Him.

It can be crazy sometimes to truly follow Jesus. But it’s much crazier not to.
By Mark Fox