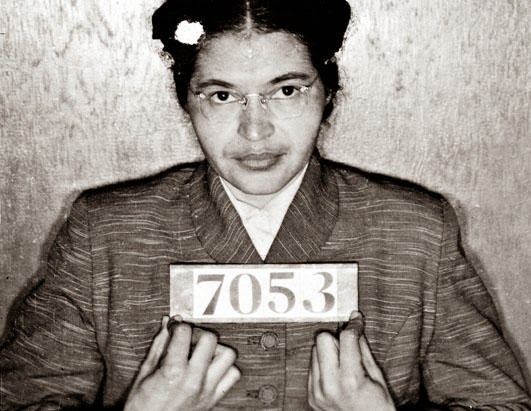 We all know about Rosa Parks’ courage in 1955 when she refused to leave her seat on the bus. The law in Alabama was that blacks had to move to the back, or stand, if seats were needed by whites. Her actions resulted in the Rev. Martin Luther King Jr. taking a lead role in the fight for civil rights for African-Americans. Asked years later if she was afraid on that December day in Montgomery, Rosa Parks said, “I have learned over the years that when one’s mind is made up, this diminishes fear; knowing what must be done does away with fear.”

Two millennia earlier, Paul and Silas may have participated in the first ever-recorded sit-in. Here’s how it happened. Paul and Silas were accused of being Jews (guilty!) and of “disturbing the city” (they were preaching about Jesus). I told you the story last week of how Paul and Silas were beaten without a trial, thrown into prison, and then a series of amazing events led to the salvation of the Philippian jailer. The next morning the Roman magistrates heard the news and just wanted to get rid of these two men. They sent their police to the prison to say, (and this is the Foxian translation) “Hey, we have great news! Your two men that we beat to a pulp yesterday, publicly? You know the two? Well, they can go free! In fact, the magistrates send their blessings and their best wishes for these men to be in peace.”

They expected the two men to be overjoyed, but instead Paul said, “So, you beat us publicly. And we are uncondemned. There was no trial, was there Silas? No, no trial. And, here’s the big one. Ready? We are Roman citizens.” At this point the two brutes must have gone pale and started sweating. But Paul was not finished. “And after we were beaten as uncondemned Roman citizens, we were thrown into prison and placed in stocks. Let’s review. Beaten in public. Thrown into prison. Put in stocks. All as uncondemned Roman citizens. And now the magistrates would like for us to receive their well wishes of peace and prosperity as we leave quietly out the back door, which by the way, I notice doesn’t exist anymore, thanks to my God. No, gentlemen, we will not leave. We will stay right here in prison until the magistrates themselves come and escort us out the front door.”

And they did. With apologies.

I don’t believe that Paul was thinking about himself and about his wounded pride at being beaten unjustly. He certainly wasn’t “suing for damages” from the Roman government. It wasn’t about Paul at all. He took a stand for the sake of others’ freedom in the city to worship Jesus. He was thinking about Lydia, a slave girl, and a Philippian jailer. He would write to the church later, “Do nothing from selfish ambition or conceit, but in humility count others more significant than yourselves. Let each of you look not only to his own interests, but also to the interests of others.” That’s the question to ask before we play the protagonist in anything. Is this for me or for others?