A slave girl and a jailer 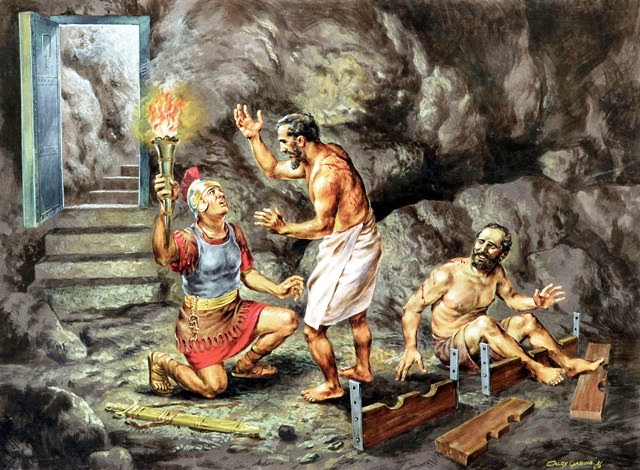 No, it’s not a country song, though it would make a good one. It’s a story right out of the Bible, about two unlikely characters who came to faith in Jesus in first century Philippi. The slave girl was possessed of a spirit of divination, by which she made lots of money for her owners who used her as a fortune teller. Paul exorcised her demon and cancelled her sorcery’s license in one fell swoop, and for his troubles he ended up being beaten with rods and locked in stocks in the inner prison. That’s where we meet the jailer.

We don’t know much about this man. Tradition says that he was a retired Roman soldier, too old to fight with the Roman army, but not too old to work in the local prison. He was comfortable with using violence when necessary, but happy when he could make it through a night without a fight. He had finished processing the two newest prisoners, Paul and Silas, shoved them in their cell, locked them down, and was hoping the rest of the night shift would be uneventful. You cannot make up a story as fantastic as what was about to happen.

Because on this night, at midnight, the other inmates heard a sound they had never heard before in a prison, especially out of the mouths of men who had just been beaten to a bloody pulp. What would normally provoke a vile spewing of venomous curses produced something completely different in these two new inmates. Paul and Silas were singing praises to God. The rest of the cellblock was shocked into silence. But we are just getting started, here. Singing prisoners was surprise number one. As the concert continued, the second surprise of the night happened. An earthquake shook the ground violently, leaving all the prison doors open and every prisoner’s shackles loosened. The ultimate surprise was next: Not one prisoner escaped. They were all free and they could have run away, but no one did. That brings two questions to my mind: First, why did God cause the earthquake that opened the prison doors and set the captives free? Second, why did all the prisoners stay right where they were when the doors were opened? There’s one answer to both: God loved a Philippian jailer and had plans for him. Had even one of the prisoners escaped, the Roman government would have required the jailer’s life. I love the irony in that: Their escape would have cost the jailer his life. But Jesus’ life paid for his escape. When the jailer took out his short sword and prepared to kill himself, thinking the prisoners had run away, Paul yelled to him to stop. “We are all here,” Paul said.

The jailer ran and fell down before Paul and Silas and asked that question that, dear reader, is more important than any other question you could ever ask: “What must I do to be saved?” And the answer that Paul and Silas gave is so simple: “Believe in the Lord Jesus.”

Believe in the Lord Jesus!
By Mark Fox