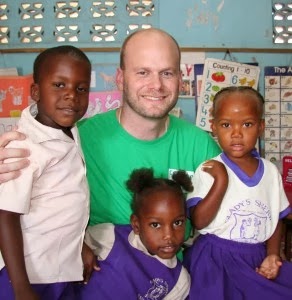 Joseph Williams’ first trip to Haiti was in a diaper, as a 1-year-old. He was traveling with the New Directions, a ministry founded by his father, J.L. Williams, in 1968. The New Directions crossed the country as a multi-racial singing group in the late 1960s and early’ 70s and sang, “wherever they were welcome and even some places where they were not,” Joseph recalls. “I remember many spring breaks when the group would sing to college students who were not worshiping the Lord on the beach.” The New Directions sang in the public square, in prisons, schools, orphanages and in churches. “A multi-racial team in those days was remarkable, but I didn’t know it because for me, it was normal. I grew up with afros and lamb chops! It was really groovy; no big deal,” Joseph said with a smile. “It was a blessing, though, to look back and see that what we did was groundbreaking.”

The ministry went through a transition in the 1980s from a singing group to a mission’s organization. Joseph said, “My father is a gifted preacher and he wanted to see the Gospel preached to the world.” When J.L. Williams retired from the New Directions and handed the reins to his son, that did not mean at all that the patriarch was slowing down. “I jokingly call him Lieutenant Dan, from the movie ‘Forrest Gump,’ Joseph said, “because if he doesn’t die on the battlefield, he’s going to make the Lord send him back. So, he’s trying to increase the odds by traveling (and preaching overseas) as much as possible!”

Joseph became the CEO of New Directions International in 2005, but as of last year, the ministry has a new name: Feed the Hunger. “We changed the name to better reflect what we are doing,” Williams said. “We want to feed the hunger, spiritually and physically, that we see in the world. Instead of just sending money to partners who will buy whatever they can to feed hungry children, we decided, why not send them healthy, nutritious food?” Feed the Hunger sponsors food-packing events all over the country, where people of all ages can come and help. Williams says the pack-a-thons give everyone who can’t or won’t go on a missions trip a chance to be directly involved. It’s also a lot of fun, and nearly any age can participate. “We say ages 5 to 105, but I’ve seen hairnets on infants,” Williams said. The ministry is currently feeding 7,500 children in five countries, and these pack-a-thons supply the meals. A plastic bag is packed with four ingredients and then sealed for shipping. The ingredients include a protein source (either soy or pintos), vitamin powder, rice and dehydrated vegetables. The bags are then boxed up and shipped overseas, where they are distributed along with the good news of the Gospel. “An empty stomach has no ears, so let’s open their ears,” Williams said.

Feed the Hunger has now expanded their operation to feed hungry people in Burlington and in two other communities in the United States. Williams said he was impacted by the Scripture where God says, “There will never cease to be poor in the land. Therefore … open wide your hand to your brother, to the needy and to the poor in your land.”
What is the heart cry of Joseph Williams? “I simply want to do what God wants us to do.”
Want to help? Go to www.feedthehunger.org and learn how to sponsor an event or even go with the team overseas to distribute food to hungry people.
By Mark Fox