Turn your heart toward Thanksgiving 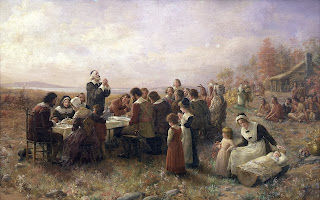 I have asked my college students this question for several years, sometimes for extra credit in a quiz, sometimes just in conversation:

“When the Pilgrims celebrated the first Thanksgiving in 1621, to whom were they giving thanks?” The answers I get never cease to amaze me. Of course, the No. 1 answer every year is, “the Indians.” More than 60 percent of the students believe the Pilgrims gave thanks to the Indians or the “king.” One student a few years ago said, “Columbus.” Really? Just under 40 percent know the right answer. I always explain to the students that they are not necessarily at fault because they have been taught in the public schools using “new and improved” textbooks. Call me crazy, but I trust the history books written before the 1950s more than the ones today. For one thing, the older history books tell us that the Pilgrims had their first Thanksgiving celebration to give thanks to … God.

Dr. Paul Vitz, a professor of psychology at New York University, has studied the bias against religious references in public school texts. He reported, for example, the second grade text by Riverside (formerly Rand Mc-Nally) has 31 pages on the Pilgrims, but it describes them entirely without reference to religion.

One mother in an upper-middle class New York City suburb complained to the principal when her first grade son was told by his teacher that the Pilgrims gave thanks to the Indians. The mother said it was simply a historical fact that Thanksgiving was a time when the Pilgrims gave thanks to God, but the principal replied that the mother’s position “was just opinion and not documented fact,” and therefore the school could not teach it. The principal said, “they could only teach what was contained in the history books.”

This is what William Bradford, governor of the Plymouth Colony, said: “… I, your magistrate, do proclaim that all ye Pilgrims, with your wives and little ones, do gather at ye meeting house, on ye hill, between the hours of 9 and 12 in the day time, on Thursday, November ye 29th of the year of our Lord one thousand six hundred and twenty-three, and the third year since ye Pilgrims landed on ye Pilgrim Rock, there to listen to ye pastor, and render thanksgiving to ye Almighty God for all His blessings.”

I have an idea. No matter what the schoolbooks say now, why don’t we as parents start teaching our children the truth? Each year, spend some time the week before (or after) reading selections from William Bradford’s book, “Of Plymouth Plantation.” Or if you have younger children and you need something more on their level, read “Stories of the Pilgrims,” by Margaret Pumphrey. We have loved reading the chapters every year that lead up to and describe that first Thanksgiving. We want our children to know who the Pilgrims were and how God led them to America.

One more idea, if I may: Let’s keep Thanksgiving as a day of gathering with family, enjoying a meal and fellowship, and mostly, giving thanks to God for his many blessings. I can remember a day when you were hard-pressed to find anything open Thanksgiving Day, except for the occasional convenience store or gas station. Not anymore. Black Friday now starts Thursday evening with many major retailers. Or even earlier. A few holdouts, like Costco, Nordstrom and Lowe’s, refused to give in to the pressure, and kept their doors closed, and their employees at home with their families on Thanksgiving. For that, and so much more, I am thankful.
By Mark Fox