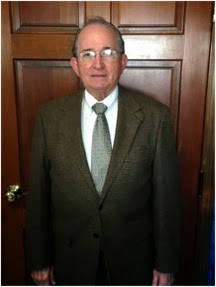 If you ask Howard Thompson why he wears cowboy boots with his suit, he’ll tell you about growing up in Stigler, Okla. But if you ask him about his passion in life, he will tell you about being a pastor. On Jan. 26, Howard Thompson will preach his last sermon as pastor of Burlington Assembly, where he has served for 42 years. On his watch, the church has grown in number and influence, and their outreach to the community now includes the Caring Kitchen (which serves the homeless and hungry on the weekends), the Assembly Oaks Retirement Community, and Burlington Christian Academy. Pastor Thompson also achieved the rank of colonel as the long-time chaplain for the Burlington Police Department. Many would regard him as “Burlington’s pastor.”

When Howard Thompson was called into the ministry as a senior in high school, his pastor gave him a chance to preach his first sermon. “I was very shy, and not much of a public speaker,” Thompson recalls. “So, the first time I tried to preach, I fainted.” Undeterred, he enrolled in Bible College in Springfield, Mo. after graduation. It was there that Howard Thompson realized his call to be a pastor. A group of students cleaned up an abandoned building and started a ministry which soon became a church, and in his second year as a student, Howard became the pastor. “Just imagine having a teenager as your pastor,” Howard said. “They put up with a lot. But I realized that I loved every bit of pastoral ministry: visiting the people, going to the hospitals, preaching and teaching.” In many ways he has embodied Peter’s advice to those in ministry to “shepherd the flock of God that is among you, exercising oversight.”

One of the most gratifying things for Pastor Thompson has been watching families grow in the Lord through the years. “To marry two young people, then dedicate their children, watch those children grow up in the Lord and then to be able to participate in their weddings. What a blessing. To see that come full circle has given me great fulfillment. I know many fine pastors who haven’t been able to stay long enough to see that. They have missed a great blessing.”

I often think back 25 years to a time in my own ministry when I met with Howard Thompson every week for lunch. He was a mentor to me early on, and I am forever grateful. I asked Pastor Thompson what advice he would give to young pastors today. He said, “First, be sure of the call. Ministry is not a profession; it is a calling. Second, remember that your relationship with the Lord is your first priority. Third, endeavor to do what the Lord wants you to do. Be faithful.”

Howard remembers a time as a young pastor when he was working to set some trusses on a new church building. A freak wind came up and blew him and the trusses to the ground. Howard was not hurt, but he was heartbroken about it, and went back to his little office and cried out to God: “I thought you cared about churches. You could have stopped that wind. I thought you called me to plant a church. Don’t you care?” When Howard ran out of steam, he said he heard the Lord speak to his heart. “Son, I did call you. And I care about building churches. But right now, I’m trying to build Myself a man.”

I believe the Lord built a fine one in Howard Thompson. Thank you, Pastor, for your faithful ministry.

You can hear the interview Mark did with Pastor Thompson at www.healthychurchradio.com.
By Mark Fox