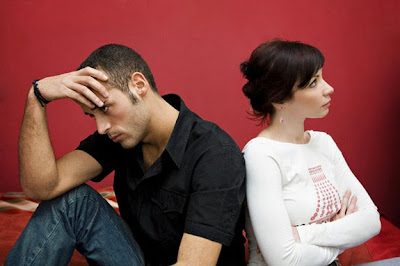 He’s had a tough day at work, with deadlines to meet, the boss on his case, clients unhappy about anything and everything. On top of all that, he’s not sleeping well because of stress, and he’s gained 15 pounds in three months because, well, he just owes it to himself to eat what he likes. And lots of it. He is driving home, fuming about his day and cannot wait to put his feet up and watch the big game, while ignoring everything else that seems to be spinning out of control.

Meanwhile, she has had it with the kids. The toddler has been throwing up, the 5-year-old won’t clean his room and keeps sneaking into the den and playing Xbox, no matter how many times she tells him no. The baby has not slept all day, and the neighbor called, again, to yell about how “you people just can’t seem to keep your stupid dog in your own yard!” She can’t wait until her husband gets home so he can:

1. Clean up the mess in the bathroom (“Hey, I cleaned up the first four projectile vomits!”) 2. Spank the toddler and put the Xbox in the attic, or better, on eBay. 3. Call the neighbor about the dog and then tell her, his wife, how he is going to make sure it does not happen again. 4. Take care of the baby so she can go for a walk or get a cup of coffee and have some “me time.”

You don’t need me to draw a picture for you of what it’s going to look like when those two meet at the front door, right? But unless one or both yield, lay down expectations, put aside their own needs to serve the other, there’s a mountain of resentment about to move into each heart.

It’s a well-known saying: “Expectation is premeditated resentment.” One of the biggest changes in my marriage happened years ago when Cindy and I both learned to lay down our expectations for each other. Another way of putting it? To give each other the same grace that God has given us. In other words, to put Phil. 4:8 into practice: “If there is anything worthy of praise, think about these things.” So, I decide I will not think about the fact that Cindy may have been critical and complaining toward me recently, but will think about what is good and true about her. And she will decide that she will not think about the fact that I am harsh and impatient at times, but will choose to think about what is good and true about me. We will choose to respect one another rather than try to change one another, because we know respect builds trust and honor.

In his book, “Sacred Marriage,” Gary Thomas writes about a tree in the Cascade Mountains that is 700 years old. This tree was 200 years old when Martin Luther was born. One of the reasons the trees on the western slope of the Cascades survive so long is simple, Thomas says: the forests there are so wet that lightning strikes cause relatively few fires. Marriages that are based on the Gospel and mutual respect will still be struck by lightning: sexual temptations, communication problems, frustrations, unrealized expectations — but if those same marriages are heavily watered with the grace of the Gospel, with an unwavering commitment in each spouse to please God and forgive one another just as Christ forgave us, then fires that normally destroy a marriage will not have a chance with ours.
By Mark Fox