Teach your children about forgiveness 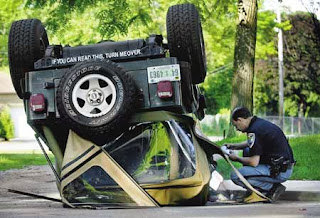 Last week, I wrote about the need for parents to disciple their children, leading them to follow Jesus Christ. The foundation of any discipleship that will produce good fruit is the Bible. Teach it to them, and help them learn how to read it for themselves.

One great theme of the Bible is our need for forgiveness. Because we are born into sin (“We are not sinners because we sin; we sin because we are sinners”), we desperately need only what a relationship with Jesus Christ can offer.

In his book “Love Does,” Bob Goff relates an incident that happened a few years ago when he was driving home from church in his Jeep. A car blew through an intersection and slammed into his left front tire. Bob said the Jeep started to roll and he flew out of it like he was shot out of a cannon.

He wrote, “I’d like to say I was wearing my seat belt but I wasn’t (I know, Mom).” He landed about 30 feet from the Jeep, sitting upright on the asphalt, with his arms propped up behind him like he was watching a ball game on a summer day. The Jeep landed upside down, accelerator racing, gas and oil spewing everywhere. Since he’s a guy, Bob said his first thought was, “Cool! There’s going to be an explosion!” But there wasn’t.

When he felt around and discovered that all of his limbs were still attached, Bob ran over to the car that had just plowed into him, and the driver was sitting, transfixed, staring straight ahead. She was a tiny, frail woman whom Bob said couldn’t have weighed more than 85 pounds, and he found out later she was 87 years old. He asked her if she was OK, told her his name was Bob, and she said her name was Lynn. Still staring straight ahead, she said, “I guess I forgot to stop.” Bob thought, “That is indeed correct.” Finally, she looked at him for the first time and said, “Young man, do you know you went through the roof of your car?” He told her that’s how he gets out of his Jeep in a hurry, you know, to save time and all.

He saw she was distraught, so he said, “Lynn, I can’t lie … that was the coolest thing that has ever happened to me.” She looked up and smiled for the first time. He said, “If there was ever a ride at Disneyland like that, the line would be a mile long. Can we do it again next week? We’ll meet right here at this intersection.”

The rest of the story is about Bob helping Lynn deal with her guilt. She would call every few days and say, “I am so sorry.” Until, finally, Bob sent her a huge arrangement of flowers, nearly as big as she was, with a note that said, “Dear Lynn, it was great running into you … now stop calling me! — Bob.” He said he thinks Lynn finally got the message that she was forgiven. He was fine and he wanted her to be fine, too. Dads and moms, your children need to find forgiveness. You can model it, like Bob did for Lynn, by being quick to forgive them and by helping them accept God’s forgiveness as well. Most of all, you can demonstrate your own need by being even quicker to ask for their forgiveness — and the Lord’s — when you sin against your children or each other. The Bible says, “Be kind to one another, tender-hearted, forgiving one another, as God in Christ forgave you.”
By Mark Fox